SHEFFIELD, Ala. – An iconic Alabama structure has turned into a labor of love for a group of retirees. This week, they began renovation work on the Old Railroad Bridge in the Shoals. It’s a rally to keep the 170-year-old bridge around for decades to come. 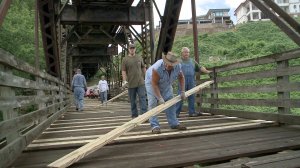 The work is reminiscent of the days gone by. Hand tools and pry bars help replace rotting deck boards. It’s grunt work, but activity which keeps volunteers like Rick Moultrie connected to his own past. He crossed this bridge during his first week working for then Southern Railroad.

“I was so scared, and the guys with me were just sitting back eating an apple and taking it easy. It wasn’t nothing to them. This son of a gun, I knew it was moving, I thought I was going to fall in the river,” said Moultrie, a volunteer for the Old Railroad Bridge.

Moultrie went on to retire from the railroad after 40-years. Most of the volunteers are also retirees from the rail industry. Keeping this bridge open to the public is in their blood. 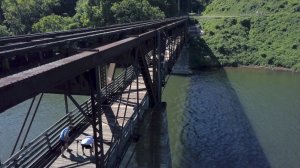 “It’s the oldest bridge in Alabama,” explained volunteer Tim Wagnon. “It has been historically around since the beginnings of 1840; the piers were in place. It has been burned once or twice; a tornado took it out I think once.”

The Old Railroad Bridge Company is in the middle of fundraising. They are collecting money to replace each board on the 1,600-foot walking bridge.

“It’s more than just the Shoals residents that come by,” said Wagnon. “You’ll be in our parking lot and see you will see tags from all over the country.”

They want to keep this a destination for all. The Old Railroad Bridge Company just needs some donations to help keep the work going.

The Old Railroad Bridge Company is a private, non-profit company with a 501c(3) status. Tax deductible donations can be made on their website.