FLORENCE, Ala. – While Washington is in recess, U.S. Senator Doug Jones is visiting every corner of Alabama. While his main focus is on the economy there’s still an elephant in most rooms he visits. 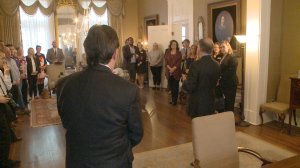 At the University of North Alabama Monday afternoon, he spoke about workforce development and job recruitment. But, it’s hard to keep his focus outside of Washington with things heating up.

As a former prosecutor, Jones says he will rely on his own experience to determine his judgment. 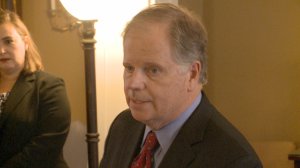 According to Jones, he wishes the nation would not judge the situation based on political parties.

“They need to get out of their political corners and start looking at the facts,” Jones explained. “Because the allegations, and they are just that right now, are very, very serious.”

Serious enough, Jones is reserving his right to see where the evidence leads us.

And at the speed things ae moving, we could get some answers soon.

FLORENCE, Ala. — Years before the current racial justice movement, Project Say Something had been hosting demonstrations outside of the Lauderdale County Courthouse.

The group is calling for the removal and relocation of a Confederate monument. All of the group’s protests have been peaceful and some have even been met with peaceful counter protests.

On social media, it’s a different story. Project Say Something President Katie Owens-Murphy said she and the group have become targets of multiple threats on Facebook.

W.C. Handy Festival scaled back due to COVID-19 concerns

FLORENCE, Ala. — An annual summer festival in the Shoals will look a little different this year.

The W.C. Handy Festival is making changes to its 2020 festival because of COVID-19 concerns. Many in-person events, like the annual parade and bike ride, have been canceled in favor of drive-in and virtual events.

MUSCLE SHOALS, Ala. — Two arrests have been made in connection with the theft of two firearms from a Colbert County Sheriff’s patrol vehicle.