“A small town like that, when you lose somebody, when someone is taken away, it takes away from everybody else too,” Tucker said.

Although the resolution was not approved, town councilmen put together a resolution opposing violence in Rogersville.

The State Bureau of Investigation is sill gathering information and identifying suspects in the 58-year-old’s death.

Officials found Ridgeway dead inside her Rogersville apartment more than a week ago. They said she was stabbed to death on October 23. 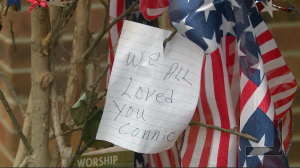 “This was a shock to the community, said Police Chief Terry Holden.  “It was one of the worst cases we’ve seen as a department.”

Mark White knew Ridgeway when he was a Rogersville police officer.

“When ever I would go there for a  medical call at Meadowlands, she was typically always there in somebody’s apartment there to help them,” White said.
Ridgeway’s son Austin Williams graduated high school with White. Through social media, Williams asked him to help organize a memorial.

Ridgeway’s friends and family invite the community to Ridgeway’s candlelight memorial service at Heritage Park in Rogersville on Saturday, November 14 at 6:00 p.m.

They plan to honor Ridgeway’s memory and stand united against violence in Rogersville and surrounding communities. Organizers are asking people from all across the Shoals, north Alabama, and southern Tennessee to join together on this night. Together, they hope to send a clear message to those who carry out violent acts in the community.

“This is not a Rogersville problem, this is a problem for all communities in north Alabama and southern Tennessee, and I want people to stand together here,” White said.

If you know who might be responsible for the violent act, contact the Shoals Area Crime Stoppers or the Lauderdale County Sheriff’s Department.

“It might be the case that the person who killed Connie is watching right now. I want them to understand that we’re standing against you. We’re going to do what we can to find you, law enforcement will find you, and I would like for you to turn yourself in and do the right thing.”

Multi-grip pull-up bars promote a wide range of upper body exercises, as you can modify your grip in order to target various muscle groups.

The best place to start to build up while slimming down is with a set of dumbbells.

A good foam roller can help relieve muscle tension, muscle soreness and inflammation from your body.