FRANKLIN COUNTY, Ala. (WHNT) – The 2014 Alabama District Six Senate race was one of the closest races in the history of the Alabama Senate.

Now, under Alabama law, election officials will recount votes and certify the results.

With 95 of 95 precincts reporting, here is the final count:

Since the race is so close, election officials must count provisional votes.

“Larry and I, neither one of us are contesting the election at this point at all,” said Bedford. “It is just following the law.”

When asked what he thought about the idea of leaving the state senate, Bedford was optimistic. “My wife Maudie and I, we prayed a lot about it, and we’re at peace.”

Either way, election officials must return provisional votes to their probate judges by Tuesday of next week. From there, they will count them and then certify the election. 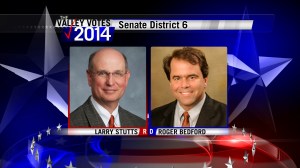 “I’m proud of my record of service, we’ve done a lot to help people,” he said. “If it’s the Good Lord’s will that we continue on in the senate I’m fine with that, at peace with it. But, if it’s time for Roger Bedford and Maudie to turn the page, hey, we’re okay with that too.”

No matter which direction, Bedford said the bottom line is the good health him and his wife have been blessed with.

“We’re both cancer survivors and we’ve got a life ahead of us, and we want it to be done in God’s will,” he said.

While he anxiously waits for the votes to be recounted, Bedford said he is going on with life as usual.

“You know, my two labs are still at home, we like to get out and walk them,” he smiled. “To do something besides politics, we’re at peace with that.”