SHEFFIELD, Ala. – A milestone has been reached in a public-private partnership which many thought would never happen. The Sheffield City Council has taken the next step in making Inspiration Landing a reality. 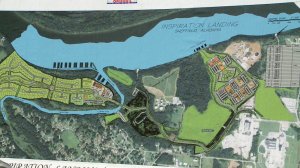 After all of the hurdles and red tape – the message is Inspiration Landing is coming. City council members have voted to authorize the Sheffield City Clerk to solicit bids to begin the infrastructure needs on the site. A $4.5-million loan will construct a new road and place sewer and water on the eastern portion of the proposed site.

The plans for Inspiration Landing are like nothing ever seen in northwest Alabama. Developers plan to have a resort, town center, distillery, micro-brewery, indoor event center, and an amphitheater.

The engineering contract signed this week, paves the way for designs to be completed and bid by construction companies. A second phase, which will require another design contract will cover the remaining part of the project. Those include a marina, residential neighborhood, and a bridge over Spring Creek.

City leaders believe bids on the first phase will be opened in six to seven weeks. Construction on the infrastructure could begin shortly after that. Private developers were recently deeded the property by the city in which the resort project will sit. They plan to begin clearing the site in the coming weeks.