FLORENCE, Ala. – Residents of one Florence neighborhood are growing increasingly frustrated. They say a newly constructed apartment development has made the street they live on quite dangerous. 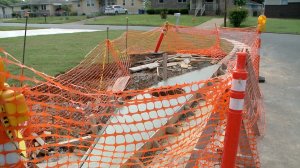 City hall has heard the cry for help. Florence City Engineers redesigned the intersection of Nance and West Irvine streets. Curbing has been added to force drivers to slow down before their turns. Because of the ongoing danger, residents say they need more.

“What is it going to take, somebody to get killed or hurt or something,” asked West Irvine resident Bonnie Sue Grant. “I can’t even get out of my driveway. It’s really ridiculous since those apartments have been up there.”

Grant has a front row seat to the action. She says a stop sign on Nance Street is ignored by most drivers turning onto West Irvine. A drop in the speed limit, she believes, would go a long way. 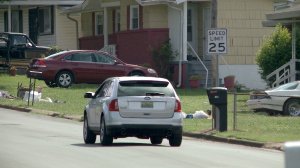 “It says 25; I think it needs to be dropped down to 20,” said Grant. “I want a sign in my yard where that plant is sitting and the pole. We used to have one a long time ago.”

Grant said she has to leave her driveway through the front yard; it’s the only way she feels safe. She would love to see a three-way stop sign intersection – which would force people to slow down and stop.

“This is not the country; drive like it’s a neighborhood,” stated Grant.

As the curbing project nears completion, city engineers said they will begin speed studies on how to slow people down and also how to get them to stop at the intersection. They also plan to add raised lettering at the stop sign on Nance Street to draw more attention to the intersection. As far as other improvements, they will have to wait until all studies are complete to see what improvements will work.

According to Florence police, they also plan to increase traffic patrols in the area of West Irvine and Nance Street.