COLBERT COUNTY, Ala. – It’s one of Alabama’s largest initiatives to repave roads and replace crumbling bridges. Two weeks ago, the Rebuild Alabama act went into effect collecting six-cents per gallon at the fuel pumps. One northwest Alabama county is already ahead of the game in repairing their roads. 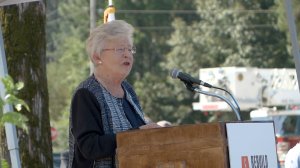 In front of a crowd of current and future drivers at Cherokee High School Monday morning, Governor Kay Ivey touted the benefits of the act. It’s the first time in 27-years an increase in the gas tax will go straight to infrastructure improvements.

“In the past, we were just kind of trying to hold things together. But now we can finally put a map together and show people where we are going,” said newly appointed Colbert County Engineer Jeremy Robison.

Robison and the Colbert County Commission did some forward-thinking after the act was signed by the governor. They borrowed $4-million with a 3.5-year payback.

“It’s allowed us to get started today. Which also allowed us to do volume buying, which I think Mr. Hovater mentioned this morning. We lowered the price from about $120,000 a mile to approximately $70,000 a mile,” Robison explained. 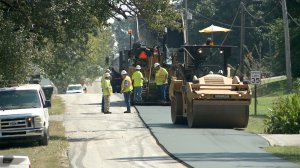 60-miles of Colbert County black-top will get fresh asphalt this year. That is roughly 10-percent of all the roads county-wide.

“We believe this is the largest paving project in the history of Colbert County,” Robison explained. “So, we are very excited about that and we think it will be very successful. And with the support of the county commission, we continue to do this in the future.”

The county commission will use their proceeds from the fuel tax increase to pay back the loan. As long as the weather remains mild, engineers believe they should be able to get this paving project completed by the end of the year.

Residents in western Colbert County have already seen paving projects beginning to take place. Engineers say they will move towards the east as the year progresses.

FLORENCE, Ala. — Shoals racial justice group, Project Say Something wrote an open letter to the City of Florence and Mayor Steve Holt on Tuesday. The letter comes after numerous protests calling for the removal of the Confederate monument in front of the Lauderdale County Courthouse.

Project Say Something has been protesting the monument for years, and at one time suggested that a monument honoring Dred Scott, who lived in Florence for a time, be erected in the plaza as well. That effort was unsuccessful. In 1857, Dred Scott unsuccessfully sued for his family’s freedom in the Supreme Court case, Dred Scott v. Sanford.