SHEFFIELD, Ala. – The Sheffield smoke-free ordinance implemented last fall is being drawn into question, yet again. A civil lawsuit is looming, brought by a property owner who feels he was misled by city council members.

A Colbert County man’s dream to open his own business is in limbo. He says Sheffield City Council members assured him a cigar bar would fit well in the city; then they banned smoking.

Sheffield council members met Wednesday morning with the intent of addressing a monetary claim filed against the city by Joseph Mitchum. Mitchum claims the city owes him $50,000, money he has spent to open a business which is now banned.

“When you make certain steps on the word and assurances of someone, and then they kind of cut your knees out from under you,” stated Mitchum. 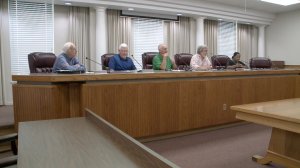 The city council tabled a resolution worded to deny Mitchum’s claim against the city. With one councilwoman not present, Mitchum’s attorney Bennett Pugh, wants to make sure all city council members are present and on the record with their vote.

“We are still at square one so to speak; other than the expenses that we have incurred in purchasing the building, architectural fees, attorney’s fees, taxes, etc.,” Mitchum explained.

Mitchum’s attorney gave the council three options. One calls for them to amend the current ordinance to allow businesses to choose whether they are smoke-free or not. Two, give Mitchum an exception for his cigar bar. Or three, pay $50,000 in damages. He plans to follow with a civil lawsuit if one of his demands are not met. The city plans to turn the claim over to their insurance company for review.

Bennett Pugh says he has already been contacted by other Sheffield business owners who say they have been affected by the smoking ban as well.

The Sheffield city council plans to address the claim against the city again at their normal meeting on July 1. Pugh has agreed to delay further action until they have a chance to meet once more.

FLORENCE, Ala. — Food insecurity will soon be a thing of the past for many students in Florence City Schools.

In July, the Child Nutrition Program was awarded a National School Lunch Program Grant to provide free breakfast and lunch for all students.

FLORENCE, Ala. - Air conditioning could return to the Florence-Lauderdale Government Building Tuesday.

The building has had serious air conditioning issues.

Mayoral forums kick off with Florence

MUSCLE SHOALS, Ala. - On Tuesday night, NextGen and the Shoals Chamber of Commerce are hosting the first in a series of virtual forums for mayoral candidates in the Shoals' four biggest cities.

According to the Times Daily, the first forum is at 7:00 p.m and features the Florence mayoral race.