MUSCLE SHOALS, Ala. – For the second time in a month, high school students have been placed on lock-down due to a threat. The Muscle Shoals City Schools Superintendent sat down with WHNT News 19 today to discuss how these threats need to stop.

Exactly one month ago, a student at Muscle Shoals High School was charged with leaving a threatening note in the band room – a message taken very seriously by the school system and police. Even days later there was a heightened police presence on campus.

“We don’t take anything for granted in the day and time that we live in any longer,” explained Muscle Shoals City Schools Superintendent Brian Lindsey.

On Thursday, while traveling on a school bus between campuses, a student digitally sent an anonymous threat to another student. It was shown to administrators, and the Muscle Shoals Career Academy was immediately placed on lock-down.

Lindsey says they quickly evaluate every threat which comes in.

“Is it specific? Is it immediate? And is it credible? We try to answer those three questions in every situation on the onset of a situation,” Lindsey stated. 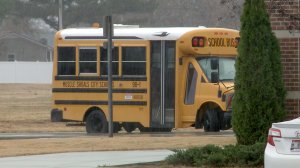 And at the same time, Muscle Shoals police are notified. Superintendent Lindsey says these threats, whether credible or not, are extremely disruptive. He is pleading with parents to speak with their children about using technology in a negative way.

“Stress the importance of thinking through what you are sending before you hit that send button. I mean, it’s a click away from something you can never take back,” Lindsey said.

The students in both incidents have been charged criminally, and police say it doesn’t matter whether it was a joke or not, a threat is a threat.

In the most current case, the 18-year-old student has been suspended and faces expulsion from Muscle Shoals High School. If a judge deems it appropriate, the student could be tried as an adult.

WASHINGTON (AP) — The operator of a major pipeline system that transports fuel across the East Coast said Saturday it had been victimized by a ransomware attack and had halted all pipeline operations to deal with the threat. The attack is unlikely to affect gasoline supply and prices unless it leads to a prolonged shutdown of the pipeline, experts said.

Colonial Pipeline did not say what was demanded or who made the demand. Ransomware attacks are typically carried out by criminal hackers who scramble data, paralyzing victim networks, and demand a large payment to decrypt it.

What COVID-era travel changes are likely here to stay?

(NerdWallet) - The COVID-19 pandemic changed the way the world works, eats, communicates and how it travels. Over the course of the last year, we’ve seen a myriad of changes in the travel industry, from in-flight meal service adjustments to the outright banning of travel to certain regions, and everything in between.

The victims were shot at about 4:55 p.m. at West 44th Street and 7th Avenue in Manhattan, authorities said. Police said both were shot in the torso.