LAUDERDALE COUNTY, Ala. – One of the largest concerts to hit the Shoals is set to take place this weekend. Grammy Award-winning musician and Lauderdale County native Jason Isbell is kicking off the inaugural “Shoals Fest”.

It’s a transformation never before seen at McFarland Park. Five thousand people are expected to attend the festival featuring Isbell, Sheryl Crow, Mavis Staples, and Amanda Shires. A thank you to all those who supported and encouraged Jason Isbell and his music career.

“The guitar was for him. Trumpet, he was good,” recalled Rogers High School Band Director John McCombs.

The long-time director can remember the exact day he met Jason. He was looking for a guitar player for a spring jazz band. A student knew another student in seventh grade who could play and the introduction was made.

“I said well play me something and he played some cool little licks; some stuff he had learned. I said well we need a guitar player; could you play with us? And that was the introduction to Jason Isbell,” said McCombs.

Jason eventually joined the “Buccaneers in Blue” band, and picking up his guitar every chance he got to play in front of his fellow students. 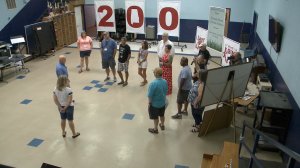 “This big superstar musician; when I hear Jason’s name I still see the boy that was here and that I worked with in band and we made music through the band,” McCombs said.

As part of Shoals Fest, a group of Isbell fans were fortunate enough to tour the band room on Friday. They got a glimpse at where it all started for the four-time Grammy Award winner.

During the fan visit at Rogers, Jason Isbell dedicated guitars to the “Buccaneers in Blue” band.

Gates to the sold-out Shoals Fest open at 1p.m. in McFarland Park Saturday with music entertainment planned to go through the night.

SHEFFIELD, Ala. — Park and Pray events have taken place at hospitals across north Alabama including Helen Keller Hospital in Sheffield.

Several dozen people drove out to the Wellcare Center at Helen Keller hospital to show their support for hospital workers who have been giving it their all during the COVID-19 pandemic.

The company said it closed the plant for five days to sanitize and clean the facility before beginning the reopening process on March 30. Assembly line workers returned to work April 1.

SHEFFIELD, Ala. - Friday night, there will be a Park and Pray service in the Shoals.

Helen Keller Hospital will host the event, which will take place at 6 p.m. at the Helen Keller's WellCare center.