TUSCUMBIA, Ala. – The Mayor of Tuscumbia is placing ‘No Dumping’ signs in a neighborhood near Northwest-Shoals Community college after residents begged for the city to step in. 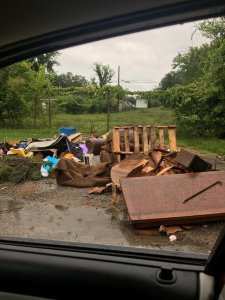 Holly Carter has lived in the same home in Tuscumbia for twelve years. She says she takes pride in where she lives, just west of Northwest-Shoals Community College.

She wishes the rest of the community would also care about the cities appearance.

“I’m just ashamed, honestly, of my neighborhood. My husband and I work really hard for our property and the fact that nobody else is doing the same. It’s upsetting,” says Holly Carter.

Carter contacted the city’s code enforcement several times with little to no response.

“I’ve called almost daily to the code enforcer asking him to pick up the trash that’s in my neighborhood and the day that it’s picked up, that afternoon there’s something else brought out here,” says Carter.

Tuscumbia Mayor Kerry Underwood told WHNT News 19 he didn’t know about the problem, but now that WHNT News 19 has brought it to his attention, Code Enforcement will put up a no dumping sign and patrol the area more.

Code Enforcement tells me dumping is punishable by up to a $500 fine if caught, which Carter feels is the only way people will take the city’s  no dumping policy seriously.

“There’s another dump site down the street it’s on Sumner, there’s a dump sight on Virginia Avenue, which is a street over from us. There’s a dump site on Decatur Street. It’s all over Tuscumbia, it’s not just my neighborhood,” says Carter.

Mayor Underwood says as of Friday evening, the city placed a sign for illegal dumping on Baker Boulevard.