MUSCLE SHOALS, Ala. – They are keeping the sound alive. A historic recording studio in Muscle Shoals is showing signs of new life after years of silence. 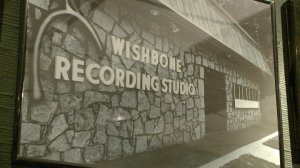 There is a nondescript building on Webster Street. The front façade is sort of back to where it was in the 1970s, including the historic wishbone. When you open the front doors there’s a presence.

And when given the chance to bring Wishbone Recording Studio back to life, songwriter Billy Lawson jumped at the chance. Spending most of his career in Nashville, Lawson has returned to the Shoals. He and his business partners have formed Muscle Shoals Recordings.

“I wrote this some kind of about you. He said, you did? He said, well send it to me. So I emailed it to him, ad he called me back and said I love it. I said well thank you, but turn the base up,” recalled Lawson of his conversation with Hall years back.

Lawson wants to use the historic Wishbone Recording Studio and record label to give others a chance to live the same dream he has over the years.

“We are hoping we can be an asset to these younger artists that are coming up here in town,” explained Lawson.

By giving them the same vibe which inspired Hank Williams Jr, Charlie Daniels, Ronnie Millsap and lots of others.

1 injured in wrong-way crash on Whitesburg

Man arrested in Trinity after struggle with agents

Celine Dion has stiff-person syndrome: What is it?

Best gifts for the kitchen today under $100