TUSCUMBIA, Ala. – As the school year is closing out for second graders at G.W. Trenholm in Tuscumbia, there’s an emptiness in their hearts. The very person feeling the same pain they have felt most of the school year has tried to make it better. 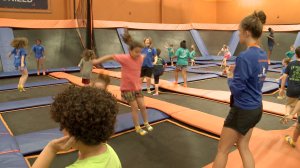 Monday morning, 111 second graders shed their shoes and replaced them with jump socks at the Florence location of SkyZone. As you could predict – chaos ensued.

The 112th student on this field trip would have been Jaleia Smith.

“I’m not going to say it’s tough,” said Jeremy Smith, Jaleia’s father. “I going to say I just wish my daughter could have been here with them. This is one of her 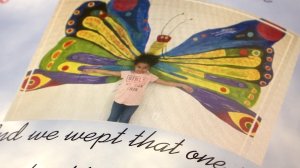 places that she loved to come to.”

For her 8th birthday party, Jaleia and her friends jumped on these same mats. Three weeks later, on September 27th, tragedy struck the Smith family through a car wreck. The little girl who had just posed with butterfly wings in the school cafeteria, grew a different set.

“Everything they helped me through with my daughter’s situation; all the support they gave me,” said Smith. “So, I just wanted to thank G.W. Trenholm for being there with me through my sorrows.”

Smith wanted to end the school year on a positive note by showing his appreciation to the students and teachers. In Jaleia’s honor, he paid for all 111-students to partake in what was his daughter’s favorite activity.

Following the tragic wreck and Jaleia’s passing, her classmates retired her student number at school and planted a tree. Messages to Jaleia have been left on her classrooms chalk-board all year also in her honor.

MONTGOMERY, Ala. — Alabama Gov. Kay Ivey asked Alabamians not to panic and use good judgment about filling up at the pump in the wake of a major fuel pipeline's shutdown.

Ivey's spokeswoman, Gina Maiola, said in an email that the governor spoke Tuesday with the U.S. Department of Energy about the shutdown of the Colonial Pipeline in the wake of a recent cyberattack.

According to the Savannah Police Department (SPD), the woman accused of taking the 6-week-old boys is now in custody.

Gov. Ivey along with 19 other governors send letter to White House on Southern Border Crisis

IRS has $1.3 billion in unclaimed tax refunds, and there’s 1 week left to claim them

Why the Colonial Pipeline hack matters to you

‘The heck!’ Tiger gets loose in Houston neighborhood