FLORENCE, Ala. – Shoals economic developmental leaders are stepping out of the box with their latest recruitment campaign. In addition to targeting industry, they are now going after individuals.

The Shoals is known for its waterways, musical heritage and quaint downtowns. There are many selling points which have attracted industry and people to the area. Jay Hayes is one of them.

“It’s small enough that you can know people,” said Hayes. “Like one of my favorite things that I kind of wished I had said it before was, I love that I know my mailman. Like, we have a relationship and we give him Christmas cookies.”

A software engineer for a major tech company, Hayes could live anywhere while working for his California employer. He chose the Shoals to raise his growing family.

“Obviously we talk a lot about cost of living, and that is fantastic,” explained Hayes. “It’s effectively a raise for me to live here versus somewhere else and work at the same place I do.”

To lure in more tech industry types, the Shoals Economic Development Authority and Shoals Chamber of Commerce are launching a new campaign. Remote Shoals is focusing on individuals who can work anywhere, and giving them incentive do so.

Ten individuals will be accepted to Remote Shoals, and get paid up to $10,000 if they live there for one year. Hayes is helping spread the word.

“We have a pretty big engineering team, and frankly I think if they were willing to take the risk they would fall in love with the place just like we have,” he said. 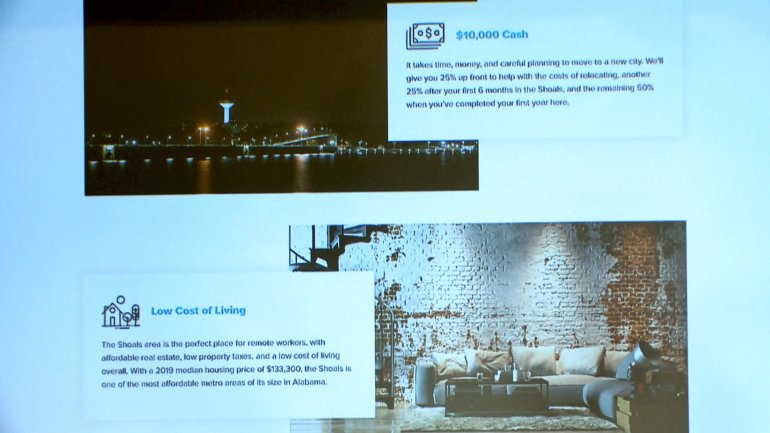 A video series and web site have been activated for Remote Shoals. Economic leaders say the campaign is already generating interest. Those interested in applying simply have to fill out an online application.

The Remote Shoals campaign is being funded through Shoals Economic Development Authority recruitment funds. SEDA leaders say they would like to add to the tech industry base which has already been created.

FLORENCE, Ala. — Governor Kay Ivey is making a trip to The Shoals Thursday to speak at an annual event hosted by the Shoals Chamber of Commerce.

It’s called an Evening for Progress and it gives Chamber members the opportunity to get an idea of what’s going on in the world of politics as it pertains to the Shoals area.