WATERLOO, Ala. - A Lauderdale County school is in prayer for a classmate who is now at Children’s Hospital in Birmingham.

The nine-year-old fourth grader was struck by a car as she was leaving Waterloo School Thursday afternoon.

“You probably only think the worse when you first hear something like that,” stated Gary Dan Williams, Principal of Waterloo School. “Myself, I prayed the whole way down here and I know a lot of other people were as well.”

Principal Williams had already made it home when got the call Thursday afternoon. 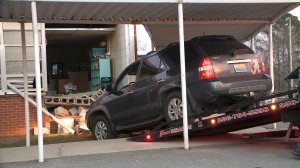 Fourth grader Georgiana Kavich had stayed late at school for a club meeting. While she stood in a breezeway getting ready to leave, she was struck by a vehicle. Witnesses said the little girl was pinned under the car.

“We love you and we miss you and we hope you get better,” Jackson Adams read aloud from his card. 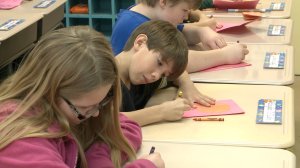 As her desk sat empty Friday morning, her fellow classmates wrote Georgie as they call her, messages of love.

“We hope you get better,” read fellow student Siera Rutherford. “We care about you and we love you so much.”

Principal Williams said the cards will help the little girl heal and get her back in class soon. 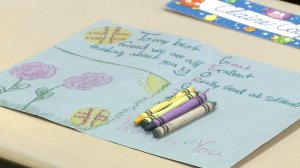 “All across school, we suggested that to them and I know that already had that on their mind during the assembly this morning. But go up and down the halls and walk into a couple of classrooms and there is a lot of that going on; a lot of people pulling for her,” Williams said.

State troopers continue to investigate the incident. They say a 72-year-old female driver may have mistaken the gas pedal for the brake pedal and accelerated towards the little girl.

At last report, Georgiana Kavich was in critical but stable condition at Children’s Hospital in Birmingham.

A teacher who was standing near Kavich at the time of the incident was treated and released for minor injuries at ECM Hospital Thursday night.

COLBERT COUNTY, Ala. — For the state of Alabama, it's another month and a half of wearing face masks and social distancing as Governor Kay Ivey extended the Safer at Home order through March 5.

"It helps us tremendously,” Hitt said. "Just like Scott and the governor said today, everybody's getting tired of it but until we get this under control, we just go with it."

At Northwest-Shoals Community College, the hospital has reopened its 75 and older clinic for COVID-19 vaccinations after receiving another shipment. The hospital said it was able to vaccinate 500 people Thursday—double the amount from Monday.

The Colbert County Health Department is also vaccinating those eligible through appointments. The clinic was so busy Thursday, Sheffield Police and the EMA helped with traffic.

Hitt said that teamwork is a large component of how emergency and medical workers are making it through the pandemic.

"It takes EMA, police, sheriffs, fire, EMS, ADPH, all your hospitals, come together, put a plan together and execute it and try to do the best we can at what we've been dealt with over the past year," Hitt said.

SHEFFIELD, Ala. — The City of Sheffield continues to make progress on new developments with projects like Inspiration Landing and the redevelopment of the former Ramada Inn.

Now the city, along with the National Park Service, has restarted its efforts on developing Tuscumbia Landing that sits at the mouth of Spring Creek.

Florence barbershop staff discusses inauguration and hopes for the future

FLORENCE, Ala. — It was business as usual at the Nu-Look Barber Shop in west Florence as customers made their way in for a fresh cut.

Barbershops often provide a space for open conversation and one unavoidable topic is usually politics.