TUSCUMBIA, Ala. – A sitting judge in Colbert County has changed his political party. Probate Judge Daniel Rosser said it was his faith and family which led to the decision. 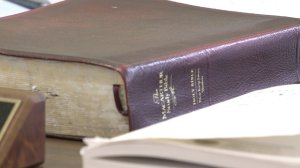 Two years ago Judge Rosser faced a dilemma. He said when the same-sex marriage ban was overturned by the courts; the ruling went against his religious beliefs.

“While it’s my job to always follow the law, and I always will, I felt like I had to start examining my political affiliations,” Rosser explained.

Rosser said joining the Republican Party wasn’t a quick decision. He says he counseled with his family and fellow community members. In the end, Rosser said it came down to the values he and other Colbert County residents share.

“I did a lot of praying and talking with people out in the community,” said Rosser. “The voters in this county I think have always been conservative, and I want to be in line with their conservative values.”

So Rosser will be listing his name as a Republican in the 2018 county race for Probate Judge. Colbert County moved closer to the Republican Party in the last election cycle. Judge Rosser was first elected to office in 2012 and serves a six-year term.