TUSCUMBIA, Ala. – A prominent Colbert County attorney was indicted on Monday accused of bribing a potential juror. WHNT News 19 has spent the day digging into the indictment and allegations. 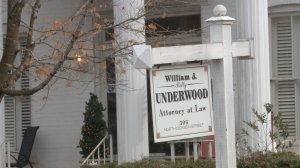 After 38-years of defending the rights of others – Billy Underwood, one of the Shoals most flamboyant attorneys, has been arrested.

A 17-member grand jury found enough cause to indict Billy Underwood for bribery of a juror. According to the state code, the charge is a felony. 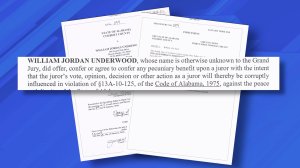 Summarizing the indictment, it states Underwood offered or agreed to give financial benefit to a juror with the intent that the juror’s vote, opinion, decision or other action as a juror would be corruptly influenced.

Underwood passionately denies the allegations. In a written statement by his attorney, they question the charge. They said Underwood has been charged in a case in which the prospective juror never went to the courthouse and a jury was never empaneled. According to sources, the case in question involved civil action – not criminal.

Attorney Brent Woodall later said in the statement, Underwood was not an attorney in the civil case, nor would he have received a fee.

Once the indictment was brought to his attention, Underwood turned himself in to the Colbert County Sheriff’s Office.

Underwood will continue serving as an attorney until the bribery charge is resolved. He is free from jail on a $5,000 bond.

Attorney General Steve Marshall said the investigation into the bribery charge is ongoing. They encourage anyone with additional information to contact the ALEA Field Office in Russellville.

FLORENCE, Ala. — Many businesses are adjusting their hours or temporarily closing during the COVID-19 pandemic. Some have unfortunately closed their doors for good.

Legends Steakhouse in Florence announced that on April 1, they would be shutting down permanently. The restaurant has been in its location at the corner of Seminary and Mobile Streets in downtown Florence since 2006. In a Facebook post, the restaurant said, "During these trying times of uncertainty, we wish for everyone to stay healthy and safe."

FLORENCE, Ala. - The University of North Alabama announced Wednesday spring commencement ceremonies have been canceled.

“These are unprecedented times we’re in, and it calls for unprecedented measures to accommodate our students and celebrate their success as graduates of the University of North Alabama,” said President Ken Kitts in a news release. “This decision was taken with significant deliberation and consultation with leaders across campus, including representatives from the Student Government Association.”

How coronavirus can impact your credit score

Spain passes 10,000 deaths after its highest single-day rise yet — but the curve is stabilizing

Few and far between: Governor Ivey answers question on Twitter