FRANKLIN COUNTY, Ala. – Authorities say a man is dead and a woman is being charged with murder.

Officials were called to a home on County Road 81 just before 6:30 p.m. on Monday. They found Jason Poore, 38, dead when they arrived. Police say Poore was beaten to death.

Investigators were back at the home Tuesday morning looking for evidence. 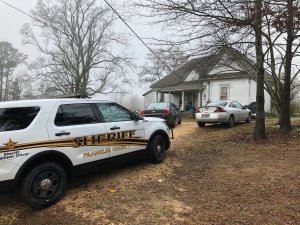 Phil Campbell police and the Franklin County Sheriff’s Office arrested Poore’s ex-girlfriend, Brittany Kaylen Barnett, 21, for his death. She was charged with murder.

Investigators said Poore and Barnett were seen arguing shortly before he was found dead.

They believe more people could have been with Barnett at the time of the murder.

Bond had not been set for Barnett Tuesday afternoon.

LAWRENCE COUNTY, Ala. - A Tuscumbia woman is dead after a two-vehicle crash late Thursday night.

Alabama State Troopers said Cherry Prestage, 44, was killed when the Ford Mustang she was driving veered over the white line on Alabama 157 at mile marker 28 and hit a 2019 Kenworth tractor-trailer around 10:45 p.m.

HUNTSVILLE, Ala. - With no objections on Thursday, the Huntsville City Council approved an agreement for a survey for a 2 and a half mile road that would connect Interstate 565 with Redstone Arsenal's Gate 10 at Patton Road.

City leaders are hopeful that this connection could help ease the traffic headache in that area.

‘Having everybody crammed back in is a little concerning’: Tennessee teachers gear up for reopening schools

RUTHERFORD COUNTY, Tenn. (WKRN) — The countdown is on for the new school year, which starts in about two weeks for a lot of students around the region.

"REA, just like everyone is just hoping for a more normal year but we cannot deny the fact that COVID is still out there," said Rutherford Education Association President Geneva Cook. "The new variant has caused the numbers to have an uptick again so that is concerning."

Vaccinations begin to rise in some states with soaring COVID cases

Should fully vaccinated people mask up with COVID-19 cases rising?

Auburn husband, father, businessman getting vaccine after battling COVID-19 without one