FLORENCE, Ala. (WHNT) – Police are investigating an assault that was reported during First Fridays in Florence.

Investigators said 20 to 30 juveniles assaulted a Lauderdale County man and his 14-year-old son at Wilson Park on Friday, June 5.  According to the victim’s wife, who witnessed the attack, the group “was using slurs of race” while tasing her husband and beating him.

“Randomly, they just him me in the back of the head,” said 14-year-old Brandon Dawes. “I didn’t think nothing of it at first because, well, I thought maybe somebody tripped or something.”

Juli Dawes said her husband Kevin was trying to protect their son when they turned on him.

“I got in between him and the attacker and told him to go toward the van , and that’s when I started getting attacked,” Kevin said.
She said the juveniles also shattered the windshield of her car, where she was waiting with her 4-year-old. 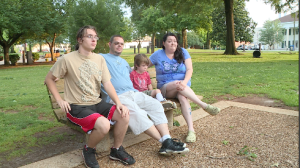 “My four-year-old said ‘look mommy, they’re dancing’, Juli said. “I said, ‘no, baby they’re not dancing they’re fighting’. Then I see my husband and he’s on the ground being tased.”

Juli said she felt helpless watching the group of thugs attack her family.

Juli is concerned such a horrific attack could happen at a family friendly event. Florence Police Chief Ron Tyler said it is not their call identify the assault as a hate crime. He said it was not gang related.

“We are considering all angles,” said Chief Tyler. “There are no set of circumstances that would ever justify an unprovoked attack by a group of thugs, and we will not allow any group to hijack the family friendly First Fridays event.”

Investigators do not have any people of interest yet in this case.

Juli Dawes hopes someone may know who was responsible. She said it was senseless violence, and wants to prevent the same thing from happening to another family.

In addition to the seven officers specifically assigned to park duty, the police department is forming a plan and designating resources to enhance security during the First Friday events to keep something like this from happening again.

Over a dozen Alabama men arrested for PCB riot

Over a dozen Alabama men arrested for PCB riot