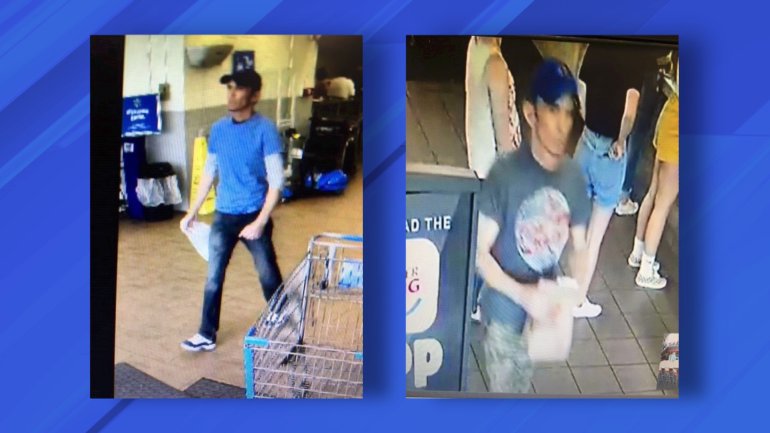 The photos have been released by the Florence Police Department. They are from two locations, a Walmart and a Burger King. Detectives say the man they are focusing on used a stolen credit card at several businesses. Over a two-day span, police say the card racked up a couple of hundred dollars in fraudulent charges.

According to detectives, they are not 100-percent positive the man stole the card or not, but he is the one seen using it. If it wasn’t for the victim’s financial institution noticing the erratic spending, the charges may have continued even longer.

Florence police would like to know who this man is. If you recognize him, contact tip line operators now.

Each tip is kept anonymous and worth a cash reward if an arrest is made.

RUSSELLVILLE, Ala. — Russellville Police still need assistance in identifying the woman in these photos.

She’s believed to be the same woman suspected of stealing another woman’s purse in the Russellville Walmart parking lot on Friday, July 24. The victim in this case was injured as she pursued the purse snatcher.

TUSCUMBIA, Ala. — The Tuscumbia Police Department is investigating reports of vandalism throughout the city.

Tuscumbia Police Chief Tony Logan said the department received a call early Tuesday morning after 2:00 that a car’s rear window was broken in the area of North Washington and High Streets. They received another call that a rock had been thrown at the window of another vehicle across the street, but that window wasn’t damaged. Then later, two blocks away, a window in a home was broken.

FLORENCE, Ala. — The man in the photos below is suspected of stealing more than $2,000 from an ATM in Florence.

The crime took place on Saturday, August 1 just before 2:30 p.m. You can clearly see the new Big Lots store on Seville Street in the background.