FLORENCE, Ala. (WHNT) – An early morning fire outside a famous eatery in Florence is being considered arson.

Fire fighters with Mid-Lauderdale Volunteer Fire Department were called to Newbern’s Restaurant on Florence Boulevard just after 6 a.m. when a motorist spotted smoke coming from the back of the building.

Investigators with the Lauderdale County Sheriff’s Department said the fire appears to be intentionally set by someone. 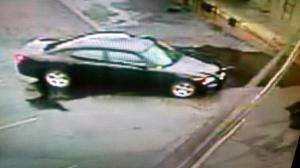 Surveillance cameras captured this image of a vehicle in the parking lot just before 9-1-1 was notified.

The State Fire Marshal’s office has been called in to investigate the fire. Investigators the restaurant received slight smoke and water damage. They say the fire was contained to the back side of the building.