HUNTSVILLE, Ala. (WHNT) – Rocket Chef 2017 is in the books and was a smashing success! The culinary competition, which is in its 4th year, took place on Monday, August 7th at Merrimack Hall Performing Arts Center. Proceeds from the event are split equally between the Food Bank of North Alabama and Merrimack’s Happy Headquarters outreach program.

In front of a sold out crowd,  four chefs were put to the test with crazy combinations of mystery ingredients and a limited amount of time to turn them into something delicious. These four chefs took on the challenge: 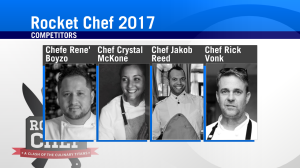 The chefs competed in three rounds, preparing an appetizer, entree and dessert for this panel of judges:

After three rounds of competition and a fierce fundraising campaign, Chef Rene Boyzo won the title.

Check out this video, shared on the Rocket Chef community page on Facebook, of Chef Boyzo’s winning moment.

“It was a privilege to be a part of an event that truly helps so many in our community,” said Boyzo. “Thank you to the Rocket Chef committee for creating an event that opens door for other new chefs to showcase their talents and be inspired to grow and achieve their culinary goals. It was an honor to share this with the other three talented chefs.”

Boyzo admits that the competition was tough, but rewarding.

“It was an honor to share this with the other three talented chefs,” said Boyzo. “I would like to say thank you to everyone who voted and donated on my behalf. I’m truly humbled. This was also an eye opener for me. I am eager to keep pushing myself to do my best and become the best chef in the Tennessee Valley.”

Chef Boyzo’s skills will be on display on a regular basis when the Church Street Purveyor opens in September at The Avenue in downtown Huntsville. Owner Stephanie Kennedy-Mell has been a part of Rocket Chef since its first year by providing the wine for the tasting reception. This year, the stakes were much higher.

“What a fun and exciting way to raise money for two great causes,” said Kennedy-Mell. “This year to have Chef Rene in the competition was even more exciting and we are so thankful to the committee for asking us to participate. We are grateful to everyone who donated on our behalf. Helping these organizations is truly what motivates us.”

You can click through the Rocket Chef photo gallery to see pictures of this year’s mystery basket ingredients and some of the moments captured and shared on social media by culinary correspondent Christy Jordan of Christy Jordan’s Southern Plate and audience members using #RocketChef2017.