HOUSTON — During historic flooding in Houston, a reporter rescued a man trying to leave his car in the high waters Monday.

In the video, which has gone viral on KTRK-TV’s Facebook page, you can a man crawling out of his vehicle and into the flooding on Studemont Street. 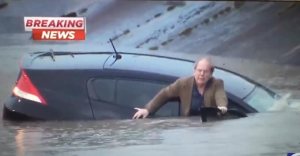 Moments after the man left the car, the video shows his car sinking completely into the water.

More than a foot of rain in some places flooded low-lying areas across the Houston region on Monday, forcing officials to suspend bus and rail service, close government offices and urge residents to stay home amid what officials said were extremely dangerous conditions.

“This is a life-threatening emergency,” the city said on an emergency website. “Houston residents should avoid travel at all costs today.”

No injuries or deaths have been reported, Houston Mayor Sylvester Turner told reporters Monday, but as many as 50,000 people are without power. At least 115 water rescues have been completed in the city of Houston alone, the mayor added.

As of Monday morning, some areas had received as much as 16 inches of rain, according to the flood control district.

Portions of I-10 and numerous roads throughout the metropolitan area were closed, as were many government offices. The city’s bus and rail service shut down early Monday amid “severe and ever worsening weather conditions.”

Some homes were also reported flooded, according to Texas officials and the National Weather Service.

Flash flood warnings were up in about two dozen Texas counties across in the southern part of the state, including the Houston and Austin metropolitan areas.

The situation is the result of a nearly stationary area of low pressure that has stalled over the western United States, allowing moisture from the Gulf of Mexico to flow into Texas over the last few days, according to CNN meteorologist Sean Morris.

Very heavy rainfall is expected to continue through Tuesday before the system begins to move off to the northeast and weaken, he said.

‘Symbol of hatred’: No charges after KKK flag hangs next door to Black family’s Michigan home