REDSTONE ARSENAL, Ala. — The Army Aviation and Missile Command (AMCOM) has a new commander.

Major General Doug Gabram previously held the position and the AMCOM deputy to the commanding general, William Mariott, served as executive director after Gabram moved to the Missile Defense Command in February.

The AMCOM flag was passed from Marriott to Daly to Royar, symbolizing the position change. His wife was presented with yellow roses as a welcome.

Royar will now lead more than 18-thousand soldiers and civilians in AMCOM. 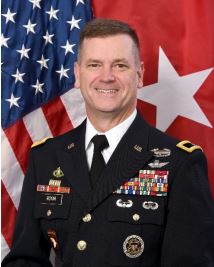 “I’m really looking forward to helping the warfighter. Having seen it from the field, I recognize the importance of the materiel enterprise, and really it’s our ability to ensure that they have what they need and when they need it,” said Royar.

His resume includes a number of command assignments from Texas to the Republic of Korea. He also sent support for Operation Desert Storm.

He previously served as the chief of staff for AMCOM and said that the familiarity will hopefully help him get started making a difference on day one.

Royar most recently served as the Deputy Commanding General for the 101st Airborne Division in Fort Campbell, Kentucky.

REDSTONE ARSENAL, Ala. - The annual Space and Missile Defense Symposium will be held virtually August 4.