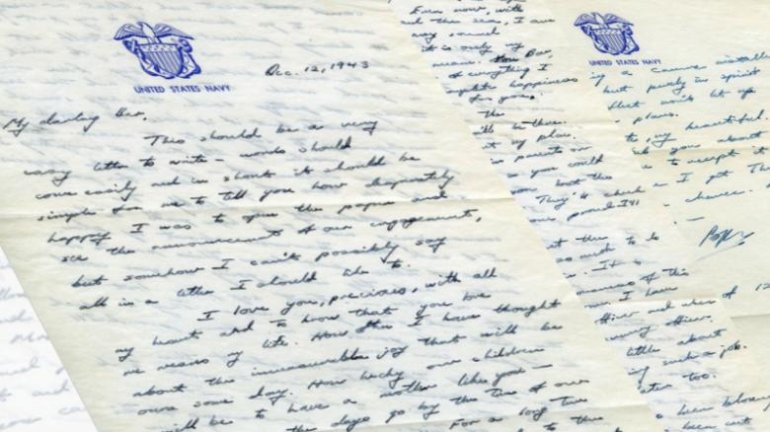 (CNN) — In 1943, George H.W. Bush was more than 40 years away from becoming the 41st President of the United States. He was 19 and serving in the Navy during World War II. He was also deeply in love with his fiancee, Ms. Barbara Pierce, who would go on to be a beloved First Lady.

A handwritten letter from Bush to his bride-to-be is housed at the George H.W. Bush Library and Museum in College Station, Texas, and it offers an intimate glimpse into the love story of a future presidential couple. The text of the letter is below.

This should be a very easy letter to write — words should come easily and in short it should be simple for me to tell you how desperately happy I was to open the paper and see the announcement of our engagement, but somehow I can’t possibly say all in a letter I should like to.

I love you, precious, with all my heart and to know that you love me means my life. How often I have thought about the immeasurable joy that will be ours some day. How lucky our children will be to have a mother like you —

As the days go by the time of our departure draws nearer. For a long time I had anxiously looked forward to the day when we would go aboard and set to sea. It seemed that obtaining that goal would be all I could desire for some time, but, Bar, you have changed all that. I cannot say that I do not want to go — for that would be a lie. We have been working for a long time with a single purpose in mind, to be so equipped that we could meet and defeat our enemy. I do want to go because it is my part, but now leaving presents itself not as an adventure but as a job which I hope will be over before long. Even now, with a good while between us and the sea, I am thinking of getting back. This may sound melodramatic, but if it does it is only my inadequacy to say what I mean. Bar, you have made my life full of everything I could ever dream of — my complete happiness should be a token of my love for you.

Wednesday is definitely the commissioning and I do hope you’ll be there. I’ll call Mum tomorrow about my plan. A lot of fellows put down their parents or wives and they aren’t going so you could pass as a Mrs. — Just say you lost the invite and give your name. They’ll check the list and you’ll be in. How proud I’ll be if you can come.

I’ll tell you all about the latest flying developments later. We have so much to do and so little time to do it in. It is frightening at times. The seriousness of this thing is beginning to strike home. I have been made asst. gunnery officer and when Lt. Houle leaves I will be gunnery officer. I’m afraid I know very little about it but I am excited at having such a job. I’ll tell you all about this later too.

The wind of late has been blowing like mad and our flying has been cut to a minimum. My plane, #2 now, is up at Quonset, having a camera installed. It is Bar #2 but purely in spirit since the Atlantic fleet won’t let us have names on our planes.

Goodnite, my beautiful. Everytime I say beautiful you about kill me but you’ll have to accept it —

I hope I get Thursday off — there’s still a chance. All my love darling —

Barbara Bush passed away this week at the age of 92 after an undisclosed illness. She is one of two women in American history to have had both a husband and a son elected President (Abigail Adams is the other).

“I married the first man I ever kissed,” she would often say. “When I tell this to my children, they just about throw up.”

And they were married longer than any other presidential couple.

She leaves behind a legacy of public service, in particular a conviction for literacy and education. Of her cause she once said, “I chose literacy because I honestly believe that if more people could read, write, and comprehend, we would be that much closer to solving so many of the problems that plague our nation and our society.”

And perhaps, there would be more love letters too.

DECATUR, Ala. - A tiny, but beloved arts venue in Decatur, celebrated what has become an annual tradition Sunday, its birthday.

Founded in 2003, staff from the Carnegie Visual Arts Center celebrated the big day by welcoming guests into the venue for free. This year's party included a rendition of happy birthday performed by the Decatur Youth Symphony.

Guests also were also treated to cookies and refreshments.

The center usually showcases artists from across the country, but in honor of its birthday, it is currently featuring artists from North Alabama.

"We always try to do something here at the center to commemorate that day. We're planting flowers in the dye garden. We're dying handkerchiefs, and we're also making turtles out of playdough. So we're just doing all sorts of fun things." said Kim Mitchell, executive director of the Carnegie Visual Arts Center.

If you would like to check out the center's current exhibit, titled "Embracing Art", the museum says it will be continuing through April 27th.

The clinic will be Monday, April 13 from 7:30 am through 11 am, or as long as supplies last. It will be located at the Leighton Storm Shelter, 8856 Main Street.

ISLE OF WIGHT, Va. (WAVY) — Virginia Gov. Ralph Northam has ordered the Virginia State Police to conduct an independent investigation regarding a traffic stop incident involving two Town of Windsor police officers and a second lieutenant in the U.S. Army.

In a statement released Sunday afternoon, Gov. Northam described the incident as "disturbing" and that it angered him.