MADISON, Ala – Protesters gathered outside Madison City Hall to demand that the Madison City Police Department’s body camera video be released, from when Dana Fletcher was shot and killed on October 27.

Protesters arrived at 10:30 a.m. with signs and a speaker. They chanted “the same story every time, being black is not a crime,” “raise the stakes and show us the tapes,” and many more. 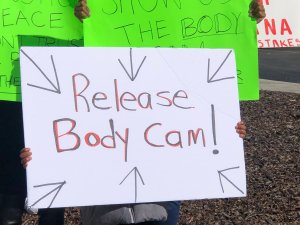 “We are here to support Dana Fletcher’s family and to put pressure on the Madison City, Madison County, and North Alabama officials who are withholding information,” said one of the protesters, Darwin Salaam II.

The Madison County Sheriff’s Office said Fletcher had a gun and pointed it at police officers. That’s when they shot him.

“Let us know what their procedures are what their policies are instead of being quiet,” said Salaam.

A morning full of chants, signs, and emotions. Kiana Shoulders brought all three of things to the protest, along with her children.

“It was important for me to bring my children here simply because I have boys and one day they will have to grow up in this world,” said Shoulders. “I fear that they might have an encounter with a police officer one day and they may lose their life.”

The protesters said that they’re starting a conversation that law enforcement doesn’t want to have.

After the protest, they laid flowers at the parking lot of the Planet Fitness in Madison, where Fletcher was shot and killed.

On Thursday the Madison County Sheriff’s Office turned the investigation over to the District Attorney Office.

Kenny Anderson is the multi-cultural affairs officer for the City of Huntsville.

His job is talking to people - more kinds of people than most of us.