HUNTSVILLE Ala. -- Former Alabama football punter, JK Scott, recently made headlines for praying over President Trump during his trip to the White House. WHNT News 19 caught up with him during a trip to Huntsville Sunday, where he recalled his experience in Washington.

"I didn't feel nervous at all when I went up to him," Scott said of the president.

Scott said in that moment he didn't see the Commander in Chief; he saw President Donald Trump like anyone else. Someone who needs love.

"I mean it's weird. I saw him like a little boy," Scott said. "You know, and he's the president of the United States and I saw a boy in him." 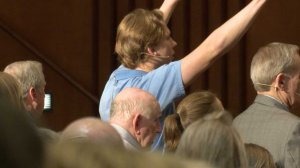 The Crimson Tide was visiting the White House to celebrate their 2017 national championship win. After the ceremony, on the South Lawn, Scott asked the president if he could pray with him. He said that moment was also special because he got to share it with his teammates.

"Not only did it give the President a chance to be prayed over, but also our team was able to pray together," Scott said. "And that was a good experience for a lot of those guys, and actually kind of opened some of their eyes to what's important."

Scott spoke at two services at Whitesburg Baptist Church, to share his experiences and message with the congregation.

"What I  learned from it is, is no matter if you're praying for President Trump, or if you go up to the random guy on the street and talk to him about Jesus and encourage them, it's all the same in the Lord's eyes," Scott said.

The protests, which began in Minneapolis following Monday's death of George Floyd after a police officer pressed his knee on Floyd's neck for more than eight minutes, have left parts of that city a grid of broken windows, burned-out buildings and ransacked stores. But the demonstrations have since become a national phenomenon, as protesters decry years of deaths at police hands.

ABOARD AIR FORCE ONE (AP) — President Donald Trump said Saturday that he will postpone until the fall a meeting of Group of 7 nations he had planned to hold next month at the White House despite the ongoing coronavirus pandemic. And he said he plans to invite Russia, Australia, South Korea and India as he again advocated for the group's expansion.

Trump told reporters on Air Force One as he returned to Washington from Florida that he feels the current makeup of the group is “very outdated" and doesn't properly represent "what’s going on in the world.”