PRATTVILLE, Ala. (AP) — Jurors have convicted an Alabama man of killing his brother-in-law in a dispute that began over grass cutting. 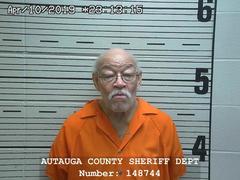 The Montgomery Advertiser reports that evidence showed Brown was shot to death after he began cutting grass on a piece of property owned by Huffman’s family.

Huffman argued he shot the man in self-defense. He claims Brown attacked him after the two got into an altercation.

But a taped interview shows that Huffman appeared to say he “whacked” the other man for being on his land.

A judge scheduled Huffman’s sentencing for May 16. He faces a prison sentence of 10 years to life.

‘I had to have him’: Police say man who shot five in Georgia and Alabama over weekend racially motivated