MONTGOMERY, Ala. – State Auditor Jim Zeigler asked fans of his Facebook page, called Zeigler: Waste Cutter, what he should do about Governor Robert Bentley swinging by his office with a “peach offering” of Chilton County peaches. 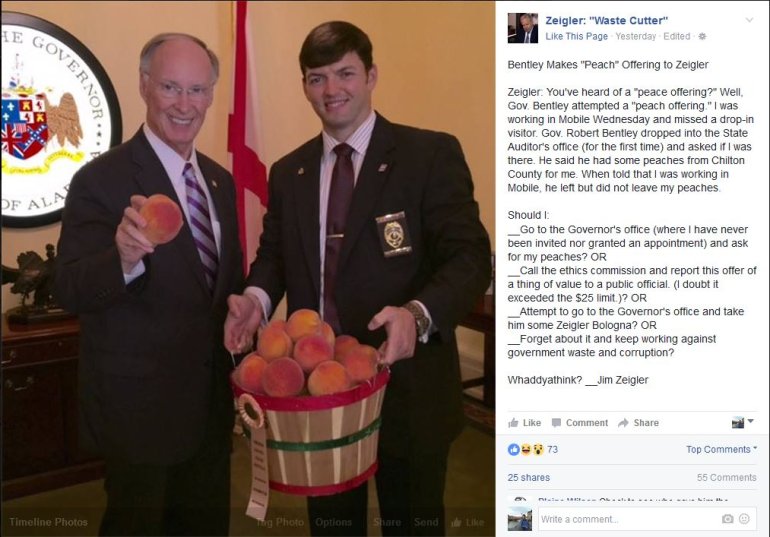 Zeigler’s post says he was working in Mobile when the governor dropped into his Montgomery office and asked for him.  The governor brought peaches from Chilton County for the auditor.  When he found out Zeigler wasn’t in the office he left, taking the peaches with him.

It appears Zeigler took the photo attached to the Facebook post from a Clanton Advertiser article from 2015.

Zeigler has named Bentley in two lawsuits this summer alone; one about the use of BP oil settlement money to build a beachfront hotel and conference center and one regarding the contract for STAARS, the state accounting system.

WHNT News 19 reached out to the governor’s office to see if he really brought the peaches by Zeigler’s office. A spokesperson tells us the governor got the peaches at an event from a Peach Queen. He brought them back to the office, and stopped by to give some to Zeigler, whose office is just down the hall from the governor.

The spokesperson says the peaches were given out to other people after the visit to the auditor’s office.

MONTGOMERY, Ala. (AP) — A medical marijuana bill is headed to its first vote in the Alabama Legislature as advocates hope to gain legislative traction after years of setbacks in Montgomery.

The Senate Judiciary Committee will hold a public hearing on the legislation Wednesday and could vote the same day. The bill by Republican Sen. Tim Melson would allow people to be prescribed medical marijuana for certain conditions, including cancer, anxiety and chronic pain, and to purchase cannabis products at a dispensary licensed by the Alabama Medical Cannabis Commission.

WASHINGTON (Nexstar) — One year ago, President Trump declared a border emergency and began transferring money from the US military to fund construction of a wall between the US and Mexico.

Thursday, Trump notified Congress an additional $3.8 billion will be transferred from this year’s defense budget.

Mo Brooks has served as the U.S. Representative for Alabama's 5th congressional district since 2011.