HUNTSVILLE, Ala. - People in the Huntsville area tell WHNT News 19 they have received letters that appear to be from the Republican National Committee to raise money for the President's 2020 campaign.

The mailer looks similar to a document from the US Census Bureau. 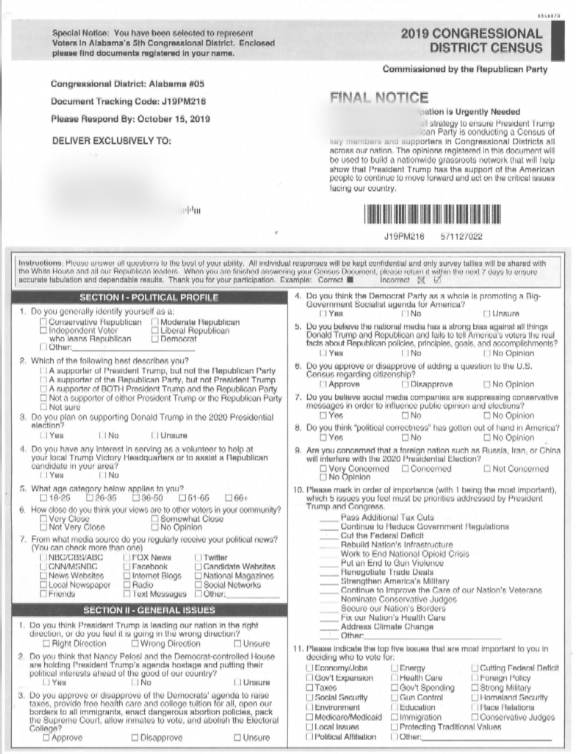 The letter looks very official. And it comes to your mailbox at a time when political leaders are urging Alabama residents to prepare to fill out and return their official the US Census. This letter is not the US Census. You'll get that letter next year.

The letter currently going around says "Final notice" and "Do not destroy official document."

Inside there is a form labeled "2019 Congressional District Census". But look closer, and you'll see some unusual questions like "Do you think 'political correctless' has gotten out of hand in America?"

Further down it asks for a monetary donation. 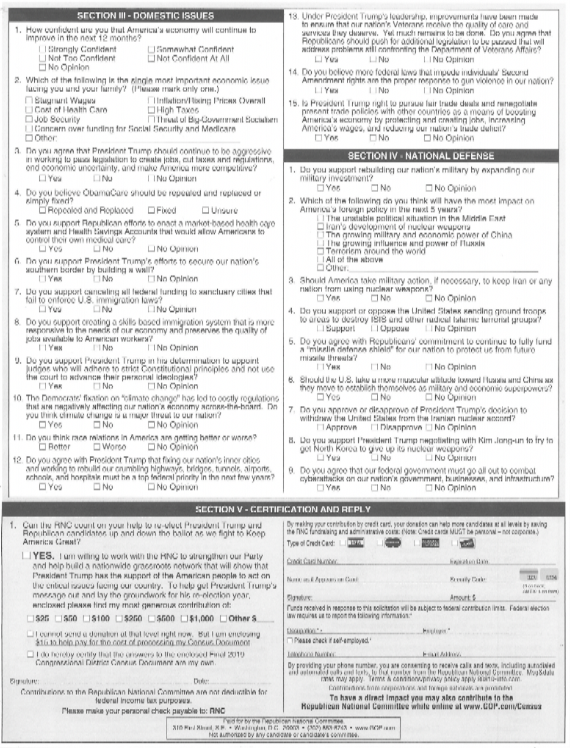 The letter also includes a message from the RNC's chairwoman Ronna McDaniel. She explains that the money donated would go to the Republican National Committee. It's called the census project.

The letter also says the RNC in urgent need of millions of dollars in donations for voter outreach, grassroots organizing and opposition research in key battleground states.

WHNT News 19 reached out to the RNC about the mailer.

A spokesperson released a statement to saying quote: "Mailers are clearly marked that they are from the Republican National Committee. The mailers receive an overwhelmingly positive response and we continue to send each year because it performs so well."

WHNT News 19 also asked the spokesperson if they knew how many Alabamians received the letter or if they planned on sending more. They did not respond to those questions.

Officials from the North Alabama Better Business Bureau say there are some tell-tale signs to look for when you get a real census document.

"It will say US Census Bureau on there...Also, the legitimate census will not have a portion to where you can donate money," said Julia Cherry with the North Alabama BBB.

BBB officials say as election season approaches, be wary of unsolicited mail and even unsolicited calls. Because they might say they're raising money for a party or candidate, but actually the only thing they're trying to win is your hard-earned money.

"You do have to be careful because scammers are preying on consumers right now knowing that election season is upon us," Cherry said.

WHNT News 19 reached out to several state officials. A representative from the attorney general's office says their office has not received any complaints regarding this fundraising letter.

The communications director for the Attorney General's office released this statement that said, "Our office has not received any complaints concerning the fundraiser mailer you referenced.  We would, however, remind consumers to exercise caution before providing money or personal information in response to any solicitations received by mail, email, text or telephone.  Persons who wish to inquire about a particular solicitation, or who wish file a consumer complaint, may contact the Attorney General’s consumer division at 1-800-392-5658, or visit https://www.alabamaag.gov/consumercomplaint."

The Alabama Department of Economic and Community Affairs also responded to our request for comment. They released a statement that says, "Thank you for making us aware of this survey being mailed to addresses in north Alabama. While this form resembles the general look of a census form, it is from a political party and is in no way related to the 2020 Census. The 2020 Census is very important to the future of Alabama with funding for many important programs that support schools, roads, health care and dozens of other areas of our state. We encourage all Alabama households to participate in the 2020 Census after they receive an invitation letter from the U.S. Census Bureau in mid-March 2020.  "

ADECA also provided links to resources for people who may be concerned about a census letter in the mail.  A sample copy of the official 2020 Census form is available on Alabama Counts website.

If you are still unsure, you may always email Alabama Counts at icount@census.alabama.gov or contact the U.S. Census Bureau’s hotline at 800-923-8282.

On Thursday, Gov. Ivey took COVID-19 questions from Alabamians on Twitter. The calls continue to grow for Alabama to issue a shelter-in-place order.

WASHINGTON (AP) — A gun rights group is cheering the Trump administration’s designation of the firearms industry, including retailers, as part of the nation’s critical infrastructure during the coronavirus emergency.

The designation by the federal Cybersecurity and Infrastructure Security Agency is advisory. The agency notes that the designation does not override determinations by individual jurisdictions of what they consider critical infrastructure sectors.

Trump said negotiations with General Motors had been productive, “but our fight against the virus is too urgent to allow the give-and-take of the contracting process to continue to run its normal course.”