Sharman’s timeline begins with a written report of his investigation to be released on April 7th. Sharman was hired by the judiciary committee to put together a report on the governor’s behavior in office to see if there are grounds for impeachment. The committee would then vote to pass impeachment along to the full House of Representatives.

However, Sharman’s office says, “The proposed timeline was provided as a courtesy to interested parties and is subject to change due to a number of variables that could affect the schedule, including potential litigation filed by the Office of the Governor, Gov. Bentley personally, or both.”

The proposed schedule looks like this. The tentative schedule would put the impeachment matter before the full house on May 9th. 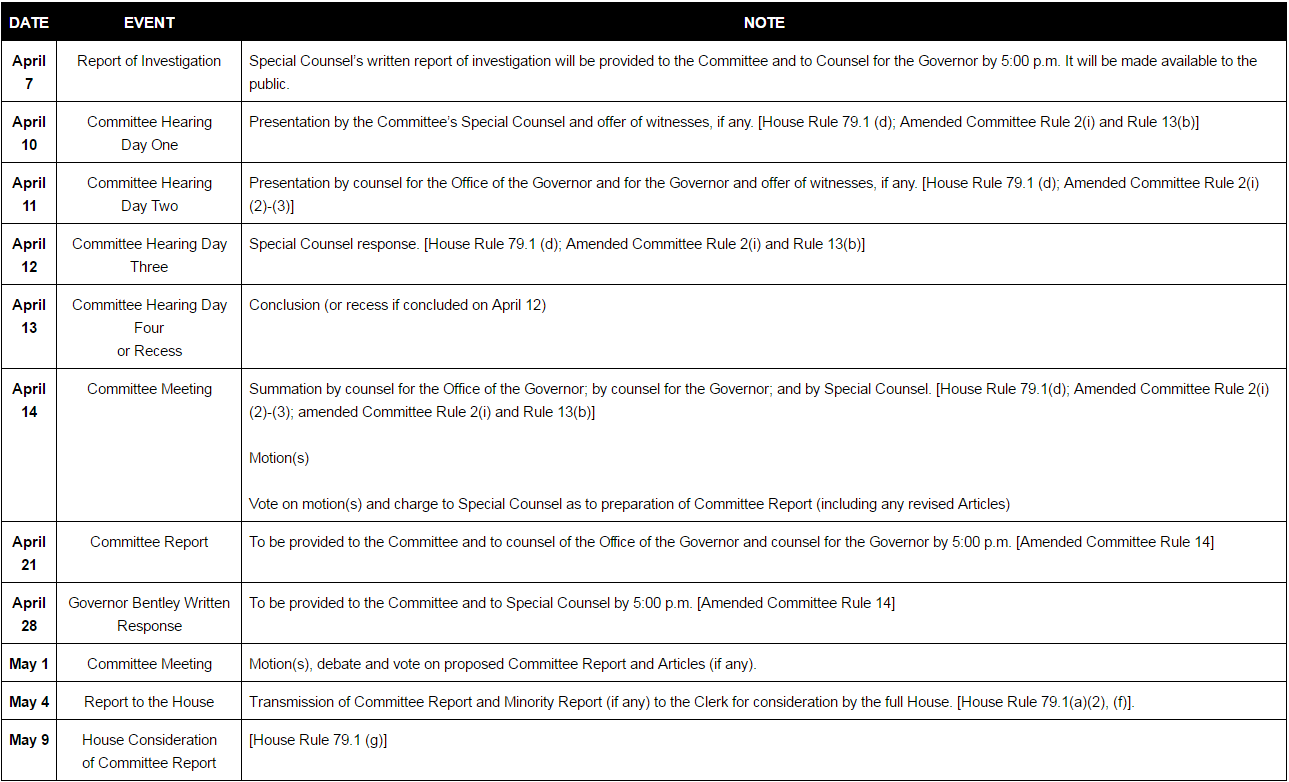 The governor’s lawyers are already fighting back against the schedule. In a letter signed by attorneys Ross Garber and David Byrne, who represent the governor, they rebuke even the premise that Sharman can set such a schedule.

“We received your letter of March 23, 2017 in which you purport to speak for the House Judiciary Committee in setting a process and procedure for the Committee’s performance of its duties pursuant to House Rule 79.1, notably its adjudication of whether Governor Bentley should be impeached. Your letter is inconsistent with the Committee’s directives to you, with the directives of the House pursuant to Rule 79.1, and with the mandates of the Alabama and United States Supreme Courts.”

Bentley’s attorney for the impeachment matter specifically, Ross Garber, put out the following statement on the timeline:

“Apparently the outside lawyer for the Judiciary Committee has decided that the only way to accomplish the first ever impeachment of an Alabama Governor is to violate the law. The Alabama Supreme Court and the Rules of the House of Representatives require that the Governor be given due process. Common sense dictates that an election not be overthrown without fair procedures. I have confidence that responsible members of the Judiciary Committee will not allow their proceedings to be hijacked and turned into a kangaroo court.”

The committee said in a statement Friday attributed to the Democratic chairman and the ranking Republican member that it has begun the investigation and will gather additional information about the allegations.

Biden willing to compromise on $2.3T infrastructure plan but is not open to ‘doing nothing’

Biden said Wednesday that he is willing to listen to lawmakers opposed to his proposal to increase the corporate tax rate to 28 percent, but reiterated his pledge not to raise taxes on any American making less than $400,000.

Former President Donald Trump has endorsed Mo Brooks for Alabama's open U.S. Senate seat. In a statement, Trump said "Mo is a great Conservative Republican leader, who will stand up for America First."

He went on to say "Mo Brooks has my Complete and Total Endorsement for the U.S. Senate representing the Great State of Alabama. He will never let you down."

5,200 tons of cosmic dust fall to Earth each year

World-record giant rabbit stolen from its home in the UK

US to leave troops in Afghanistan beyond May, 9/11 new goal