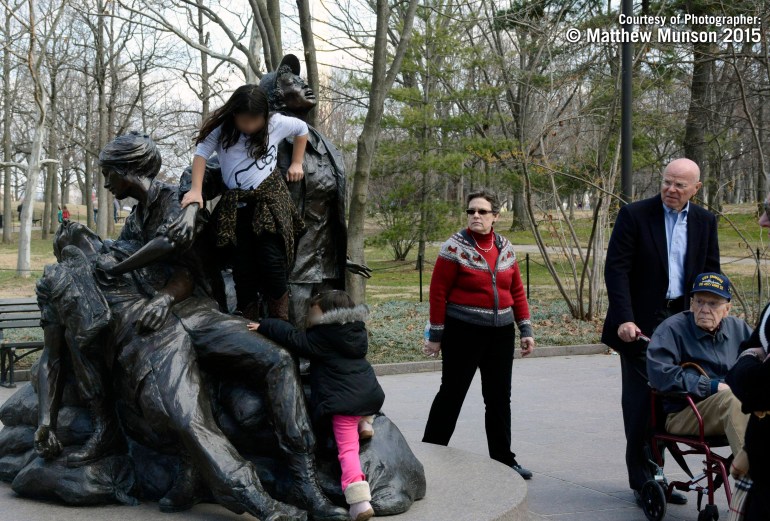 WASHINGTON DC – The nation’s capital has many sites that honor the service and sacrifice made by those who served our country. The Vietnam Women’s Memorial was dedicated to the women of the United States who served in the Vietnam War, most of whom were nurses.

Matthew Munson was visiting the memorial when some parents encouraged their children to climb on the memorial for a picture.

“There wasn’t a lot of people at this point,” Munson said, “then a big group of people showed up just as the kids were treating the memorial more like a jungle gym and the parents were laughing… Then the veterans showed up, and they looked hurt more than angry. They were quiet.”

The photo sparked a debate on Reddit about how children should act around memorials. User z3k3 stated, “my grandfather (WWII vet) loved watching the kids play on the local memorial that had the names of lost friends and family (including brother’s). He saw it as a way for the next generation to take some joy out of something so terrible and at the same time gave them a link to the past as many would stop to read the names or even get interested enough to read up on the subject a little.”

After the debate, Munson concluded, “At this point I lean more towards the parents being disrespectful. Certain memorials and statues are more positive and welcoming to kids and parents expressing their freedom and good vibes, other memorials (this one) focuses on the tragedies of war and how certain groups of people played a big role in helping others recover from it. Having children step all over a wounded warrior is not an appropriate way to express the freedom our veterans fought for, in my opinion. I think the parents should have explained to their kids the meaning of the memorial and the heroics of women involved in the crisis, and save the climbing and playing for a jungle gym.”

Munson said people who feel it is disrespectful shouldn’t blame the children, though. “I feel like the parents should be ashamed, and anyone that tries to blame the kids are wrong in doing so. If you look at the hurt veterans, they are looking past the kids and towards the parents that are out of the frame.”

Let us know what you think. Join the conversation about this picture on Facebook.

Trial set: Man accused of driving to HSV for child …

Bless your heart: ‘Alabamian’ may be certified dialect

3 allegedly found with over 70g of meth

3 allegedly found with over 70g of meth

Bless your heart: ‘Alabamian’ may be certified dialect

Trial set: Man accused of driving to HSV for child …