LACEY’S SPRING, Ala. — Gasoline Alley was backed up for miles Monday morning due to a 18-wheeler wreck just before the Tennessee River Bridge. According to the Lacey’s Spring Fire Department, the semi hit the cement median just after 4 a.m.

Officials say the driver told them it was so foggy that he lost track of the road. There are no reported injuries. 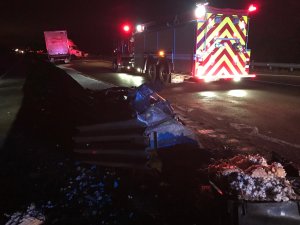 "We've got a coordinated effort going on to do that. We're going to go out, we've got a way to obviously identify, track and go back and follow up with people who might test positive," Spillers said. "We want to make sure that our homeless community is taken care of and I think we have a well thought out process."

PALMETTO, Fla. (AP) — Mounds of harvested zucchini and yellow squash ripened and then rotted in the hot Florida sun. Juicy tomatoes were left to wither — unpicked — in farmers' fields.

Thousands of acres of fruits and vegetables grown in Florida are being plowed over or left to rot because farmers can’t sell to restaurants, theme parks or schools nationwide that have closed because of the coronavirus.

MADISON COUNTY, Ala. - The community is invited to help support local healthcare workers during a park and pray event.

Light it Up North Alabama will take place Easter Sunday, April 12 from 6:30 p.m. - 7:30 p.m. Participants are asked to drive to Huntsville Hospital, Madison Hospital or Crestwood Medical Center, and turn on their lights and radio.