MADISON COUNTY, Ala. – Dug Hill Road and Highway 72 East in Madison County has been coined by the community as a deadly intersection for at least a decade. The most recent wrecks claiming three lives has led officials to re-evaluate if there needs to be a traffic signal here.

Alabama Department of Transportation and engineers have done traffic studies on the Dug Hill Road intersection. Despite several fatalities over the last 20 years, they didn’t feel it warranted a traffic signal. Madison County Commissioner Craig Hill says he is hopeful for changes.

“ALDOT is concerned and they have been concerned. They’re going to make improvements I really believe,” says Craig Hill.

Highway 72 is a state highway maintained by ALDOT. The intersection currently has flashing stop signs, which some people say is not enough.

“The most recent development is that our state Senator Sam Givhan is working on change here. It’s ironic that he and I talked last week and then we talked again yesterday. He has had good meetings with ALDOT,” says Hill.

Senator Givhan tells WHNT News 19 that local leaders in both Huntsville and Madison County have committed to paying for the traffic light. Now they’re working to get the approval from ALDOT.

“The discussion now is to signalize the intersection. We want to bring a group together to discuss that. We feel like at this point there will be some changes made sooner than later,” says Hill.

“The ability to just do something as quickly as people think it should be done… there’s more to it than that,” says Hill.

There is currently an online petition to put a traffic signal at Dug Hill Road and Highway 72 East. More than 8,200 people have signed that petition as of Wednesday afternoon.

WHNT News 19 reached out to ALDOT. Their Public Information Officer, Seth Burkett, says they still do not recommend putting a light at this intersection. They plan to eliminate left turns from Dug Hill Road. 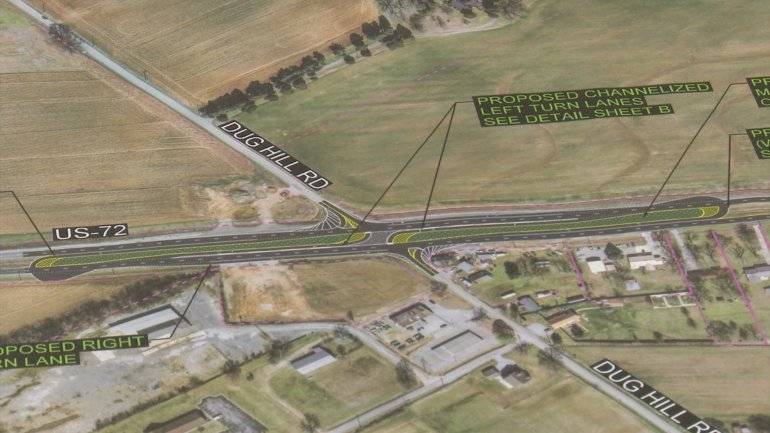 GUNTERSVILLE, Ala - Crazy Cazboy's intended to open in March, but COVID-19 delayed the discount liquidation store's opening. Friday, a line wrapped around the warehouse and the crowds inside did not appear to adhere to social distancing guidelines.

On Friday everything in Crazy Cazboy's was $7. The price drops each day before it eventually resets.

ATLANTA (AP) -- Protests over the death of George Floyd in Minneapolis police custody spread around the United States on Friday, as his case renewed anger over others involving African Americans, police, and race relations.

Protests were largely peaceful as demonstrators marched in the streets from Los Angeles to New York, but in Atlanta, demonstrators set a police car ablaze and broke windows at CNN’s headquarters.

ATLANTA (AP) — Demonstrators marched, stopped traffic and in some cases lashed out violently at police as protests erupted Friday in dozens of U.S. cities following the killing of George Floyd after a white officer pressed a knee into his neck while taking him into custody in Minnesota. In Phoenix, Denver, Las Vegas, Los Angeles and beyond, thousands of protesters carried signs that said: “He said I can’t breathe. Justice for George.” They chanted ”“No justice, no peace” and “Say his name. George Floyd.”

After hours of peaceful protest in downtown Atlanta, some demonstrators suddenly turned violent, smashing police cars, setting one on fire, spray-painting the iconic logo sign at CNN headquarters, and breaking into a restaurant. The crowd pelted officers with bottles, chanting “Quit your jobs.”