Twelve of those were in Alabama and four tornadoes touched down in Lee County. One of them was an EF-4.  The last time an EF-4 hit the county was March 20, 1875. This storm was the deadliest March tornado in Alabama since March 21, 1932.

People in Lee County continue to pick up the pieces. Governor Ivey has visited the area. Attorney General Steve Marshall has walked through the wreckage. Thursday, U.S. Senator Doug Jones visited the community of Beauregard.

The winds roared at 170 miles per hour Sunday. It was enough force to rip trees from their roots, turn over vehicles, and ravage part of the community of Beauregard.

“Our trailer’s there. It was just twisted sideways. It’s not livable. Pretty much looked like somebody flipped it upside down and flipped it back on its side,” tornado survivor, Aimee Thrower said. 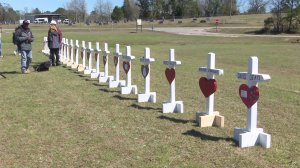 “Right across the road from me, my neighbors have nothing. Lives were lost there. So, we’re very fortunate and we think,” tornado survivor, Christina Thrower said.

“The devastation just absolutely will take your breath away,” said Senator Jones.

FEMA has crews on the ground helping people who lost everything sign up for emergency funding. Volunteers are coming forward to help with clean-up efforts. 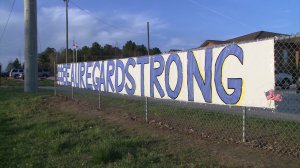 Donations are continuing to pour in. Emergency aid has been granted for the area. But in the weeks and months to come, area officials ask people to not let Lee County slip from their minds. Because they have a long road ahead as they construct a new normal.

While many want to reach out and help, some want to harm. In Lee County,  there have been sporadic reports of looting. Sheriff Lee Jones has a message to anyone who wants to harm tornado survivors.

“If they have any inkling about coming to Lee County, coming to Smiths Station, coming to Beauregard and have evil intent, then be forewarned they will go to jail,” Jones said.

He says the sheriff’s office is working to keep the areas with damage secure so the people who are supposed to be there can access the property without the fear of people stealing belongings displaced by the storm.

DETROIT (AP) — Ford is recalling about 200,000 cars in the U.S. to fix a problem that can stop the brake lights from turning off.

The recall covers certain 2014 and 2015 Ford Fusion and Lincoln MKZ midsize cars as well as some 2015 Mustangs.

On Sunday night police said they started getting calls from people who could not reach the nursing home's staff by phone. Some residents said they hadn't seen any staff at the facility.

Doctors weigh in on how long Omicron lasts

Video
Close
You have been added to Morning Newsletter Newsletter