MARSHALL COUNTY, Ala. – Search crews found the body of a missing teen at the Double Bridges Red Mill area in Marshall County.

Seventeen-year-old Emmanuel Villalobos -Torres went missing yesterday. He and some friends were in the Double Bridges Red Mill area Monday when he went missing. A friend told rescue crews he last saw the teen floating down the stream face down.

Crews were searching from boat Tuesday morning when they found the teen’s body in a deeper part of the creek, not too far from where he was last seen. “He was found about a quarter of a mile down the creek where they were actually swimming,” Asbury Volunteer Fire Department member Albert Childress says.

Crews suspended their search Monday night at sundown, because the currents in the creek were too dangerous after dark. They started back again early Tuesday morning. It wasn’t long after the search resumed that they found the teen’s body.”The body washed down the creek and wound up I understand in a hole,” Childress says.

Monday afternoon Marshall County Sheriff’s Office searched the area with a helicopter in addition to multiple other crews searching on the water and along the shore. Those efforts resumed Tuesday morning. “They had boats and had people walking up and down both sides of the creek,” Childress says. 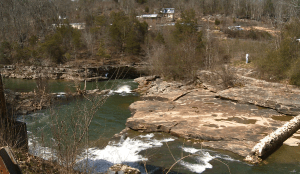 Responders say when they got there Monday, two people were sitting on the rocks at the steep drop off and said one of them had tried to help Villalobos -Torres, who had gone into the water. “But he couldn’t, and said last time he saw him he was floating face down going down the creek,” Childress says, “There’s a lot of turbulence where the two creeks come together.”

The water is moving quickly throughout the area, which made it hard for crews to search safely. “It was just real difficult to find the body,” Childress says.

The search was stationed at two one lane bridges that span a fast-moving creek, over a steep rocky drop off. That’s where the teen and the two others were when the 17-year-old went missing. The area is made up of steep terrain and a fast-moving creek. “It’s just rock cliffs there, it’s just hard to even walk down much less get a boat in, and the banks are so steep all the way up and down through here,” Childress explains. The one-lane road leading to the search area is narrow, making it difficult for large emergency vehicles to maneuver.

A student organized prayer vigil is scheduled for Thursday morning at 7:00 in front of the school. Friends and community members are also collecting an offering to give to his family to help with costs.

The Marshall County coroner says the official cause of death is accidental drowning. An autopsy will not be done.

There is no word on funeral services as of yet.

ARAB, Ala.- MainStreet Family Care in Arab has adjusted its protocol after a recent News 19 report.

In it earlier this week, employees said the clinic had been giving the COVID-19 vaccine to patients who aren't eligible under the Alabama Department of Public Health's Phase 1A and 1B vaccine rollout plan.

She told News 19 on Thursday that managing the coronavirus pandemic is a balancing act between keeping people healthy and maintaining the economy, so she says this extension is “absolutely” the right thing to do.

MARSHALL COUNTY, Ala.- As more COVID-19 vaccines become available for Alabamians, a new struggle appears: having enough staff to administer it.

However, the City of Arab is among many others in northeast Alabama that are planning to help fill those gaps.