HOLLYWOOD, Ala. (WHNT) -- Hundreds of pounds of drugs are off the streets, thousands of dollars are recovered, and hundreds of offenders are in jail all thanks to the help of a police officer - a K-9 Officer named Abi - and she is retiring.

"She's had a very big impact on the war on drugs here," Hollywood Police Chief Jason Hepler says. He and K-9 Officer Abi have been partners since the police dog started with the department. "She's been with us for about three and a half years," Chief Hepler says.

That's not very long, but that's enough time to make an impact. "Nearly a hundred thousand dollars, several hundred pounds of drugs," Chief Hepler says Abi helped recover all of that while assisting agencies across the county.

He says Abi has been a big part of Hollywood Police. But, her days as a K-9 officer are numbered, because Abi is retiring. "I'll miss working with her everyday, it's going to be a huge adjustment because she's been my partner for almost four years," Chief Hepler says.

But even though Abi is retiring, she won't be going far. She'll stay with Chief Hepler. 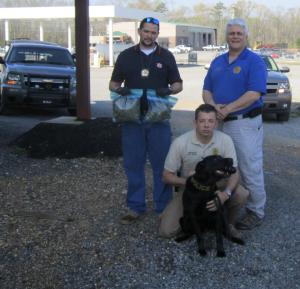 She has a few more weeks as a K-9 officer. Then, she'll be off duty and another police dog will have some big paws to fill. "She's done an outstanding service for her community," Chief Hepler says.

The department will get another police dog when Abi retires in January.

Just in case you were wondering about her name - Abi is named after the Alabama Bureau of Investigation.