MARSHALL COUNTY, Ala. – It’s been an ongoing tradition for Alabama’s sheriffs to leave a mess for the next sheriff to fill their position. Six months after becoming Marshall County’s sheriff, Phil Sims says he’s still dealing with issues created by the previous administration.

Last Wednesday our news partner AL.com reported that nine out of ten new sheriffs who won elections against sheriffs who had been around for years said their predecessors’ last minute actions negatively impacted the office.

Sheriff Sims says Scott Walls refused to help with his transition into the new position, but that wasn’t the biggest problem.

Even though Sims says he came into the position blindly, he quickly noticed the 20,000 rolls of toilet paper, hundreds of boxes of garbage bags and ten 55-gallon drums of dish washing soap.

“The toilet paper and the garbage bags that was ordered was over $15,000,” said Sims.

The sheriff’s office does order in bulk, explained Sims. But he said he would never spend that amount of money on only two items.

$15,000 is their budget for the entire year for all maintenance items.

Sims says that wasn’t the only problem he came across when he got into office.

He says he found destroyed company phones and computers with missing hard drives. 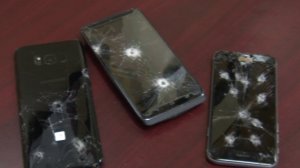 “Reams of records were nowhere to be found,” reports AL.com.

Sims has asked for the Department of Public Examiners to do an audit for the previous administration and his time in the office. He says they’ve agreed to do the audit but the date is unknown.

To keep the jail and sheriff’s office running, Sims has had to work with the County Commission to make a new budget plan.

Sims says without the County Commission they wouldn’t have been able to overcome these issues.

Sims says now that he’s starting to see the light at the end of the tunnel, the part that bothers him the most is that he knows Walls took an oath to Marshall County.

“That oath doesn’t mean you can go out and break the law or, or you know, just waste taxpayers’ monies or anything like that,” said Sims.

So now, he says Marshall County has created a bill to hold each Sheriff accountable moving forward. That way no sheriff in the area will be able to leave anyone else in this predicament.

“We’ve got a local bill passed that applies to Marshall County only that the … outgoing sheriff, which will be me in this case one of these days, can only spend a certain amount of his budget,” said Sims.

Sims says he’s spending his time cleaning up the mess he was left so next year will be more productive.

Fort Payne man arrested for sexual abuse of a child

The DeKalb County Sheriff's Office said Adan Hernandez Ballesteros, 55, was arrested Friday for sexual abuse of a child under 12.

MARSHALL COUNTY, Ala. - Blood samples collected from a burglary in June of 2020 led to the arrest of a Marshall County man in January of 2021.

On June 29, deputies say they were called to an alarm on Columbus City Road near Grant. When Deputies arrived, they say they saw a side window leading into the garage was broken and blood was visible on the glass and floor below the window.

JACKSON COUNTY, Ala.- The mother of a Jackson County inmate is voicing her concerns over their treatment.

Sharon Adkins told News 19 that the inmates do not have access to outdoor recreation time or religious services.

PepsiCo teams up with Beyond Meat in new partnership

Wish you had a guard dog? Amazon has a new feature for that

Should you be wearing two masks? Here’s what Dr. Fauci says

Fort Payne man arrested for sexual abuse of a child

1 dead, at least 28 injured after tornado rips through Birmingham area