GUNTERSVILLE, Ala. – On Tuesday, Marshall County Sheriff Phil Sims announced contraband was found outside the jail.

Sheriff  Sims said a “slick little group” of people on the outside were wrapping batches of contraband in electrical tape to make ropes of sorts and smuggling them in through new entry points.

“What’s happened is when we shook the jail down and we put all of these other things in place, these measures to try to keep the contraband out, they’ve had to go back and start using their imaginations, different methods, and this is what they’ve come up with,” Sims said.

A few weeks ago they found drugs, homemade weapons, tobacco, and a slew of other things including tools, during a shakedown of the jail during Sims’ first week in office. He put new procedures in place to try to keep as much contraband out as possible.

Sims said the contraband is down considerably in the jail, and through the procedures in place, they’re able to intercept more of it coming in.

This is the first time they’ve seen something like this. “Some of it up here you can tell has got tobacco, obviously cell phones in there,” Sims said, “It even feels like there are pliers in one part of it.”

The jail staff found and intercepted the contraband ‘ropes’ at different times. One of those, a corrections officer saw one of the heavy strands going through a vent from the outside that the inmates had busted out. “He grabs it, and there’s actually an inmate on the other side trying to play tug of war with him,” Sims said. 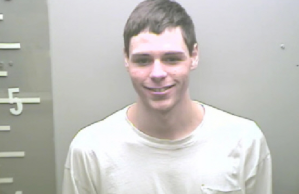 Deputies arrested that inmate, Luke Couch, and charged him with promoting contraband. Sims said he already had that same charge, and this new one could be increased depending on what was inside the contraband package.

Some of the contraband they found in the ‘ropes’ are phones, marijuana, pills, tobacco, and tools.

“We’re going to take our time unwrapping it, because we’re going to send it off for fingerprints,” Sims said. If they get results, he said they plan to prosecute that person or people.

DEKALB COUNTY, Ala. - A man from Boaz died after his motorcycle collided with another vehicle Tuesday afternoon, Alabama troopers said.

The Alabama Law Enforcement Agency said Tymon Ladon Young, 21, was driving on Alabama Highway 68 around 3:30 p.m. when he collided with the vehicle. Young was pronounced dead at the scene.

GRANT, Ala. – Strong storms caused quite a bit of damage in different parts of Marshall County Monday night.

On Honeycomb Road in Grant, trees were ripped from their roots, torn apart, and scattered across yards, homes, and boathouses.

Arab pushes back start of in-person school to Aug. 20

ARAB, Ala. – Arab City Schools is pushing its first day of school back to Aug. 20 in order to meet the latest set of COVID-19 prevention guidelines from the Alabama Department of Health.

The district said Tuesday it was working on complying with ADPH's guidance from Aug. 4 that defined close contact as anyone within 6 feet for 15 minutes with or without a mask.

Outcry rising over bill that would allow child marriage in Somalia

‘Cat’ burglar is after shoes in Pennsylvania neighborhood