ALBERTVILLE, Ala. — A Marshall County couple is opening a chapter in life they never, not once, thought they would experience. They’ve been through every emotion you can imagine, but with their community behind them and their faith in front of them they’re ready to take it on.

Eric and Courtney Waldrop have been together since the eighth grade. They got married in 2004 and they always wanted a family. “I knew I wanted a houseful,” Courtney said.

A few years later, the couple welcomed their first boy. “Then we had our twins in 2012,” Courtney added.  Now their house is full of the sound of three little boys.

“We just recently decided that we wanted to try again for another one,” Courtney said, “Within one month we got pregnant but we lost that pregnancy. So we knew we would have to do fertility again.”

Weeks later, the couple found out they were expecting not one baby, but six.

That was an obvious shock. The doctor told them the chances of multiples was very low. “Just imagine the news you’re going to have six babies,” Eric said.

Excitement was overshadowed by concern about mom’s health, the babies’ health, finances, and the typical worries any new parent has, but multiplied by six. “Our faith is strong and it has been from the beginning, but it was hard to humanly let it go,” Courtney said of their worries.

“When we finally got far enough along to see the heartbeats, that’s when it all changed,” Eric added, “We turned it over to God and we realized he was going to get us through it.”

Now they’re taking it day by day, loving the boys they have and looking forward to loving the six on the way. “We know God’s going to provide and get us through,” Courtney said.

The family will reveal the genders at a Glow Run 5K fundraiser on Saturday, August 26 at Britton Field at the Albertville Rec Center. Sign-ups start at 6:30 p.m. The gender reveal is at 7:30, and the run starts at 8:00. There’s no cost, but donations for the family’s expenses for the sextuplets are welcome. Waters and snacks will be provided. Food trucks will be on hand as well. 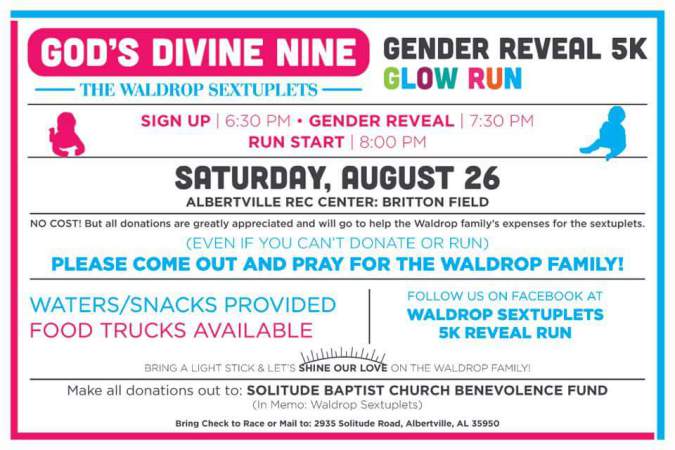 Nearest states for Alabamians to get abortions

Bear dies after getting stuck in Sevierville car

Person crushed by pallet of glass in Palm Harbor

Nearest states for Alabamians to get abortions

Bear dies after getting stuck in Sevierville car

Person crushed by pallet of glass in Palm Harbor

Why do some bears get euthanized? TWRA explains

Gatlinburg hosting many summer events including Forth …

Why do some bears get euthanized? TWRA explains

2 arrested on drug charges in Decatur

5 arrested in Decatur for drugs, loitering