DEKALB COUNTY, Ala. – Almost 200 years after Cherokee Indians lived in DeKalb County, archaeologists and Cherokee scholars have transcribed the writings they left behind in a cave that many have forgotten.

Manitou Cave holds history that many learn about early on in life.

We learn about the Trail of Tears and that President Andrew Jackson forced the Cherokee Indians to walk across the country to Indian territory in Oklahoma, and many died along the way.

The Trail of Tears went through our backyards, and today the Cherokee’s refuse to be forgotten.

Near the city of Fort Payne, in the base of Lookout Mountain, Manitou Cave sits filled with Syllabary. 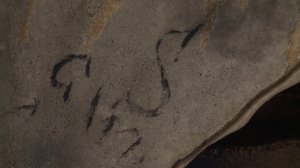 Syllabary, also known as the Cherokee’s alphabet, is written throughout the cave and when Annette Reynolds came across the cave she didn’t realize what she had found.

“Sequoyah, in fact, lived here, in this area and he was the one that created the Cherokee Syllabary. Which really saved the whole culture during their whole diaspora when they had lost all their territory in 8 states and had a forced removal.”

Reynolds found Manitou Cave in its worst condition after it had been used in 1888 as a tourist attraction.

She says then it became a commercialized cave in 1961, it was then shut down and left vacant until 2015 when Reynolds came across Manitou.

Between 1961 and 2015, people used it as a secret hideout where they held parties and vandalized the cave. 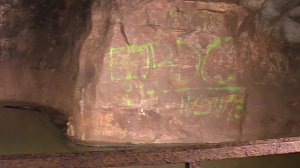 As soon as Reynolds went inside, she knew she had to preserve the history.

Reynolds says Sequoyah was also known as George Guess. He lead an active role in politics and war, and left his signature throughout the cave.

She says his signature, and the writings show a glimpse of the past. 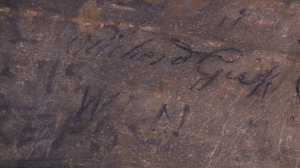 “Even though this assimilation process was taking place on the outside and in the town, and what it meant was to be civilized, there was a lot of criteria about not speaking your language, not following your spiritual traditions, not doing your ceremonies,” said Reynolds. “They had a special place in this cave which they used in the form of prayer, a form of communication, a form of documenting history that in fact there was a group that kept their traditions alive and to me this is really so significant and empowering for the Cherokee people.”

Reynolds invited archaeologists and scholars from all three recognized bands of Cherokee to research and translate the syllabary and writings throughout the cave.

She says that these writings they left behind are unlike the written communication we have today.

It’s more meaningful than a text, or email because it lasts throughout time.

Archaeologist Beau Carroll from the Eastern Tribal Historic Preservation Office said for the Indians to leave their messages it required serious thought and effort, and everything they wrote was so important to them that they risked their lives to make sure it stuck around.

“For a Cherokee just to go into a cave it’s fairly dangerous, you’re going into another world where things live that are more powerful than you are. You’re pretty much invading their space coming in here,” said Carroll. “The places that they wrote they’re not easy to get to, and it’s not like you can go to the hospital.”

Carroll helped translate the syllabary, he said some of it explains the rules to their famous game of stickball, other writings mark where and how to start their sacred medicinal practices. 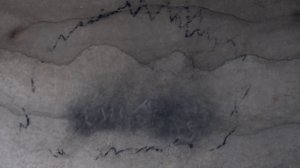 Practices that the Cherokee’s considered so sacred that even Carroll wouldn’t tell us exactly what it means.

“Historically we’ve had trouble with people translating medicinal formulas and printing them, so we try not to fully translate everything and say exactly what it says so, it’s a little touchy,” Carroll explained.

He could tell us the legend of how the writing on the ceiling got there.

“The guy that translated this stuff for me, he said a long time ago people could do a lot of things that people today can’t do, and he says just because you couldn’t get up there doesn’t mean they couldn’t, and I said ‘Well how did they get up there?’ and he said ‘well, they could fly,'” Carroll explained.

Now, whether you believe if the Cherokee’s could fly or not is up to you, but Carroll and Reynolds say, either way, the cave was meant to be preserved.

“The mission is to respect and protect this historic, sacred site, through conservation and education so that the cave and the land and the water are preserved for visitors and the wildlife,” said Reynolds

Reynolds says she made Manitou Cave a 501c3 non-profit organization because the Cherokee’s didn’t intend for the cave to be commercialized.

She has no intentions to open it to the public, but instead, she hopes to use it as a gathering place for educational purposes.
Reynolds says as long as the cave is taken care of properly, it will recover from the past neglect.

To stay updated with Manitou Cave, volunteer, make a donation for the maintenance, or reserve a group tour you can go here or visit their Facebook page.