GERALDINE, Ala. (WHNT) -- The DeKalb County Sheriff's Office confirms a teen drowned Saturday afternoon at High Falls outside of Geraldine.

Multiple rescue teams responded to the call, which came in around 5 p.m. Saturday.

"We had folks here swimming," Sheriff Jimmy Harris said.  "One guy slipped and fell and went under. His friends were trying to get him out of the water."

Sheriff Harris says the teen slipped and fell off a ledge, and went under the swiftly moving water.

Another teen was injured and stranded on nearby rocks when rescue teams got to the scene.

Search crews found the victim's body not far from where they say he slipped and fell, about two hours after the initial call came in. 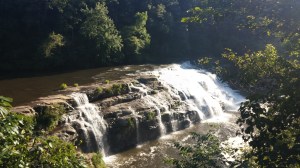 Other teens were at the scene, but they are okay, Sheriff Harris says.

Sheriff Harris says while swimming is allowed at the falls, it gets dangerous when the water is high.

"It's just a tragic thing that we're used to down here, we have injuries, people fall off two or three times a year or more," Sheriff Harris said.

FORT PAYNE, Ala.- The COVID-19 pandemic continues as the number of positive cases in Alabama has now surpassed 152,000 Monday.

In DeKalb County, there were nearly 2,500 cases Monday with 21 people who have died from the virus.

Raccoon rabies vaccine to be dropped across northeast Alabama

The United States Department of Agriculture and the Alabama Department of Public Health will be air-dropping rabies vaccines across several Alabama counties starting Oct. 1.

Marshall, Jackson and DeKalb counties will be a part of the distribution of an oral vaccine, that is part of an effort to vaccinate raccoons against the rabies virus and keep it from spreading in the area.