ALBERTVILLE, Ala. — An Albertville couple and their three boys welcomed not one, but six, healthy babies this week in Huntsville. In the meantime, some members of their community back home are doing what they say the couple would do for them. 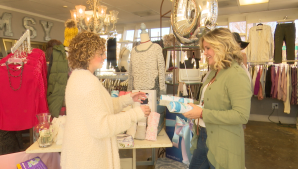 Valerie Edge owns a women’s boutique called Whimsy Edge in Albertville, and above it, Christy Ronca owns a baby boutique called The Plaid Giraffe. Together, they’re starting something they say two of their friends would do. “If anybody else needed something they would be the first ones to step up,” Edge explained. She grew up with Eric and Courtney Waldrop. “I didn’t even know how to react. I remember I texted her and just said we love you, we’re going to be there for you,” Edge remembered.

That’s when she found the Waldrops – a family of five – were expecting sextuplets.

Now the babies are here, healthy and growing strong. The fraternal sextuplets – three boys and three girls – were born at just under 30 weeks’ gestation. The babies ranged in weight from 2 pounds, 4 ounces to 2 pounds, 14 ounces. They are all in good condition but will require several weeks of specialized care in Huntsville Hospital for Women & Children’s Neonatal Intensive Care Unit (NICU) before going home to their parents.

Meanwhile, the ladies have started a widespread effort to help the family out. “You can come here to Whimsy and The Plaid Giraffe and we have it set up to where you drop off diapers and wipes. We also have a registry, a few things that we thought they might like, just to be surprised with. So you can come and donate towards that.”

Any size and brand diapers are welcome. “We’re going to have lots of other locations along north Alabama,” Edge said. Those locations will be posted to social media as they are organized. There’s also a donation jar for some of those bigger ticket items new parents need.  The family is registered at Toys “R” Us and The Plaid Giraffe.

The Waldrops said from the beginning they would rely on their faith to get them through, and the community’s support has been overwhelming. Now, as the couple put it, their “six precious gifts from God” are here, and that support hasn’t stopped.

“They have a wonderful story and I just think that was God giving it back, and we want to do the same,” Edge said.

Huntsville Hospital officials confirmed that the Waldrop sextuplets are the first set to be born in Alabama since 2011.

The babies were delivered via Cesarean section by Dr. David L. Rushing of the Clinic for Women with help from a team of about 40 labor and delivery nurses, neonatologists, anesthesiologists, Neonatal ICU nurses, nurse practitioners, and surgical assistants.

“Our obstetrics and neonatal teams have been preparing for this delivery for months. The level of detailed planning and coordination is truly impressive,” said Paula Lucas, vice president of Women and Children Services. “While we’re honored to be a part of each of our patients’ deliveries, we’re especially
proud to have the physician specialties and hospital services needed to safely deliver the Waldrop sextuplets.”

Hospital officials confirmed that employees from multiple departments held drills to practice every aspect of the delivery and first minutes of care. Nurses and physicians were divided into six color-coded care teams, yellow, purple, red, green, orange and blue, and were each responsible for a specific baby immediately after the birth.

Each team performed an initial checkup, recorded the weight and other vital statistics, and got the baby settled in a portable neonatal incubator for the short trip upstairs to the NICU.

Underscoring the rarity of sextuplet births, TLC will feature the Waldrop family in a documentary that is set to air in 2018. Part of the show was filmed at Huntsville Hospital for Women & Children and will follow the Waldrops’ life-changing journey every step of the way – from Courtney’s high-risk pregnancy to how they’ll adjust to becoming a family of 11.

What did federal agents find at Joe’s Pawn?