(CNN) — Who hasn’t struggled to sleep on an airplane economy seat, forced to improvise a makeshift pillow out of a rolled up sweater or scarf?

A new seat design comes with an innovative solution to this inflight issue, using “padded wings” that fold out from behind both sides of the seat back — allowing both for additional privacy and a cushioned spot to rest heads for some shut-eye.

This new idea from Universal Movement, a spin-off from London-based design company New Territory, is called “Interspace.” It premiered in London this week as part of the Aircraft Cabin Innovation summit 2019.

CNN Travel went along to find out more about what makes this seat different, and to test out just how comfy this concept really is.

Interspace is the brainchild of Luke Miles, New Territory’s founder and chief creative officer. He spent three years working as Head of Design at Virgin Atlantic, so he knows his aircraft interiors inside out. 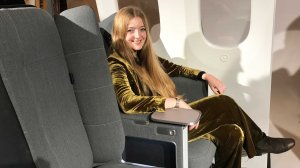 The designer tells CNN Travel he’d noticed how innovative airplane cabin designs usually focus on business or first class experiences and he wanted to come up with a way to make the cheap seats comfier.

“We’re really keen as a business on trying to — it sounds a bit cliche — but trying to push some innovation back into the majority,” says Miles.

The wings on Interspace fold manually in and out of the chair. This allows for a streamlined look, and easy access to move up and down the row.

At the London launch, there were two seats on show, one depicting what it’s like to recline and the other in an upright position. Both seats allow guests to play around with the wings’ settings.

One or both wings can be utilized, depending on passenger preference. New Territory stresses the wings are robust and sturdy.

Sitting on the seat with both wings up, I’m immediately struck by the privacy and am barely aware of my seat neighbor.

Leaning against one wing, as you would if you tried to sleep, is also surprisingly comfy.

The flexibility is intriguing. While it does seem that a whole cabin of passengers unfurling the wings at once might be a bit chaotic, it’d be pretty great to have that ability to change things up during a long flight.

It’s all about “the ability to actually develop your space,” says Miles.

Seat designs already in circulation have experimented with built in neck cushioning. Cathay Pacific’s economy seats on its A350 aircraft, for example, allow fliers to move their headrest into six different positions.

But Miles took the radical move of eradicating the headrest altogether, pointing out that chairs at home or in the office don’t typically include them.

The seat prototype on show at the launch was a carbon fiber, lightweight design — but the designer insists the wings could be fitted to most existing seats, whatever their material.

Miles says he’s in conversation with a few carriers that have shown an interest.

In fitting with the trend towards more personalized, data-driven flying experiences, New Territory is keen to add facial recognition technology to the mix too.

The idea is that as the seat wing recognizes that you’ve fallen asleep, it’ll automatically turn off the movie playing on your IFE.

Other airplane seat manufacturers have also been looking at ways of reimagining the traditional airplane seat prototype without sacrificing precious cabin space.

At 2019’s Aircraft Interiors Expo 2019 (AIX), CNN Travel tested out Airbus’ couch-style airplane seating idea, which combines three economy seats into one, allowing traveling partners to lounge together like they would in their living room, or solo flyers to stretch out and get comfy.

At the other end of the spectrum, the Skyrider, Aviointeriors infamous standing up seat, continues to turn heads — for better or for worse.

With a seat pitch of just 23 inches, this bicycle-style seat doesn’t allow much room for movement at all.

Most of us would probably rather sit on Interspace’s comparatively-luxurious take on budget seating.

It might not be quite as daring — but the opportunity of a little bit more privacy and a little more comfort in coach class is always going to be appealing.

DEKALB COUNTY, Ala - After being placed on administrative leave in February, Geraldine Assistant Police Chief Jeff Buckles faced a due process hearing, Tuesday.

Buckles posted to Facebook after the State of the Union Address, "Pelosi just ripped up his speech. Road Side bomb on her way home and any other Dumbocrats." In hours following, the post was shared all over the country. Many residents emailed and called our newsroom.

Evelyn was last seen about two months ago, but her disappearance wasn’t reported until last week, according to the Sullivan County Sheriff’s Office.

HUNTSVILLE, Ala. – Super Tuesday is in one week, and those that choose a Republican ballot during the primary election on March 3 will be able to cast a vote for one of seven candidates to run against incumbent Democrat Doug Jones.

One of those vying for the seat is Congressman Bradley Byrne, who says he has nothing against Doug Jones, but doesn’t think he's voting the way Alabamians want him to vote.