(CNN) – As a wounded veteran who served two tours in Iraq, I’ve been asked to give speeches at Memorial Day celebrations. It’s one of the hardest jobs I’ve ever done.

Veterans Day is easy. Fourth of July, a piece of cake.

But Memorial Day, that’s a tough one.

Service members like me think about the soldiers we lost pretty often. I remember when he was alive, all the stuff we did — the training, combat and even just hanging out together off duty. Then my mind usually goes to the day of his death. I remember where I was when I heard about it, or what it felt like to see him catastrophically wounded. I picture their faces. They’re young; they never get old.

Veteran’s Day is easy. Fourth of July, a piece of cake. But Memorial Day, that’s a tough one.

I remember where I was when I learned that Sgt. 1st Class Jason Bishop died. I had heard the explosion; I just didn’t know it was him.

Bishop and some of us guys used to work on our vehicles together on weekends while in the States. He was a couple of ranks higher than we were, so technically we shouldn’t have been hanging out. But Bishop had a garage, the right tools and the knowledge. I knew his wife and I can picture him holding his 2-year-old son. I look at my old jeep now and remember who did the work on it. 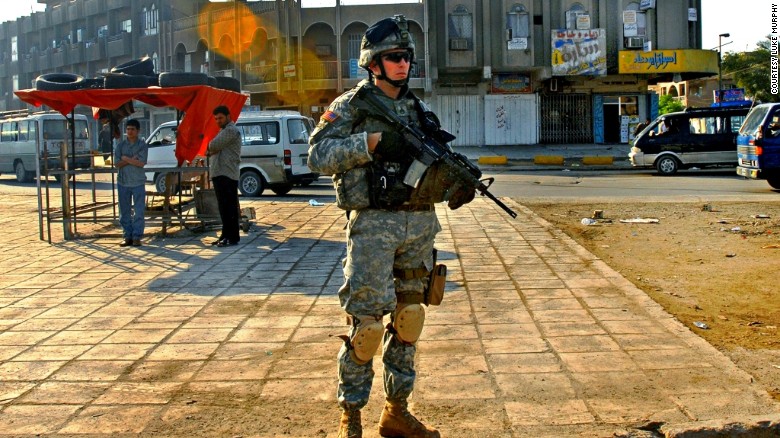 Murphy patrols in the Sadr City area of Baghdad, Iraq, in an undated photo.

New Year’s Day in 2006, I was on my second tour. I had walked up to our battalion to harass the guy in charge of paperwork about my promotion. I’d been doing the job of staff sergeant, but they hadn’t given me the title to go along with it.

When I got there, I started ragging the sergeant, but he dropped his head and wouldn’t look at me. “Murph, now’s just not a good time.”

I studied him and could see he was serious.

“Did you hear that blast earlier?” We were in Iraq, we heard blasts all the time. But, yeah, I knew what he was talking about because it had blown open the door of the trailer where I was working, even from a mile away.

I found out later that intelligence indicated three vehicle-borne IEDs, suicide bombers, in the city. An Apache helicopter had located two and eliminated the threat. They put a roadblock in place to catch the third, and that’s where Bishop was working. The bomber tried to run it, but Bishop stood his ground. He shot the driver, so the vehicle exploded early, which meant fewer deaths and injuries. But Bishop paid with his life. He went down shooting.

When soldiers die, they don’t just roll over and quit like in the movies. They fight like hell.

When soldiers die, they don’t just roll over and quit like in the movies. They fight like hell. They do whatever they can to stay alive — sometimes that’s their hardest fight. And sometimes they lose.

The biggest loser is the family, though. I feel terrible for their parents, their wives, girlfriends or kids. I think about how much it hurts them on a daily basis. They’re still suffering, and it’s never going to end.

The next biggest losers are the guys who were with the soldier. Many times they’ve got survivor’s guilt. They may have lost an arm or a leg, but they survived. If they made the call related to the soldier’s death, they’ll carry that with them for the rest of their lives.

So, what do nonfamily members and nonveterans think about on Memorial Day? Sometimes I think they just don’t give a damn.

So, what do nonfamily members and nonveterans think about on Memorial Day? Sometimes I think they just don’t give a damn.

They’re out there enjoying the three-day weekend, eating cheeseburgers and drinking craft beer. They don’t go to the ceremonies, the events that honor veterans, and they don’t pull out their checkbooks to try to make things a little easier for those who survived.

Memorial Day is supposed to remind Americans what other people have sacrificed for them. But sometimes, I think nobody’s paying attention.

If they really wanted to show respect for veterans, and the price they paid, they’d attend a service to hear somebody speak. If they felt moved, maybe they’d go to a website like Homes for Our Troops and make a donation. Or find a nonprofit that takes care of the fallen service members’ families, like Gold Star organizations. It’s not fun to think about, but people ought to think about it anyway.

I always thought if I made it big, I’d rent a big house and invite all the guys I knew during active duty together to talk about old times and remember those we lost. We live all over — in Michigan, Florida, Texas, Ohio, North Carolina and beyond.

We may not see each other, but I can guess what they’re thinking about on Memorial Day.

And it’s not about cheeseburgers.

NASHVILLE, Tenn. -- The Tennessee Titans home game against the Pittsburgh Steelers scheduled for Sunday has been postponed after four Titans players and five staffers tested positive for the coronavirus.

In a statement released Wednesday morning, the NFL said the game will be rescheduled to “allow additional time for further daily COVID-19 testing and to ensure the health and safety of players, coaches and game day personnel.”

HUNTSVILLE, Ala. - The Huntsville High School football team will forfeit its football game against Albertville on Friday, October 2 because multiple team members are still in self-quarantine.

The team's game last week, against Grissom High School, was canceled for the same reason.

OPELIKA, Ala. (AP) — Grand jurors have indicted a man on multiple charges in a shooting that left one Auburn police officer dead and two others wounded last year.

Jetpacks to the rescue on Britain’s mountains

Serena Williams pulls out of French Open with hurt Achilles