(CNN) — Authorities on Monday shot and killed the suspected shooter in the weekend slaying of a suburban Atlanta police officer, the department said in a tweet.

“The danger to the community is over,” Ayers said, explaining there were no more suspects in the officer’s death.

Maynard, 18, had been charged with aggravated assault and felony murder in the Saturday afternoon killing of Officer Antwan Toney near Snellville, east of Atlanta, authorities said.

After receiving a tip about 3 a.m. ET Monday, between 75 and 90 officers helped set up a perimeter in the Snellville area, not far from where Toney was killed. Once the cordon was established, they began knocking on doors, conducting interviews and searching sheds and structures in the area, the chief said.

After searching a home, two officers found a closed, wooden shed behind the house. When they opened it, they saw someone inside, Ayers said. They identified the person as Maynard, who had one of his hands behind his back, he said.

One of the officers deployed his Taser, and Maynard revealed a lawnmower blade that he had hidden behind his back, Ayers said. The second officer, who was standing about 5 or 6 feet away from Maynard, opened fire, killing him at the scene, he said.

It was not clear whether the homeowner knew Maynard was in the shed, but Ayers said his officers would charge anyone who aided Maynard during his time as a fugitive.

Toney’s killing remains under investigation, and the Georgia Bureau of Investigation will conduct a probe into Maynard’s shooting, Ayers said.

A few hours before news of Maynard’s death surfaced, Gwinnett County Police tweeted that there had been a “credible sighting” of Maynard in Snellville sometime late Sunday or early Monday.

Toney, 30, was responding to an anonymous 911 call reporting a suspicious vehicle parked near Shiloh Middle School when he was killed, Ayers said. The caller suspected the vehicle’s occupants were smoking marijuana.

Ayers said there was a third person in the vehicle with Maynard and Pretlow, but that person has not been identified and is not facing any charges, said Cpl. Michele Pihera, spokeswoman for Gwinnett County Police.

Ayers said he was 100% certain it was Maynard who killed Toney before fleeing on foot. His confidence was based on evidence, as well as interviews with Pretlow and the third person.

After the shooting, investigators found marijuana and four firearms in the car, the chief said.

“What prompted Mr. Maynard, the suspect, to fire, I’m not sure we’ll ever know, but the fact of the matter is Officer Toney never had the chance to verbally engage with the suspects or the occupants of the car, and the deadly shots were fired from inside through a closed window,” Ayers said.

Officer was ‘a jovial person’ 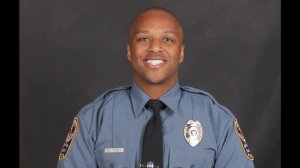 Toney, who was originally from Southern California, had been with the department for almost three years.

Before he was an officer, he had been a security guard, police said.

A memorial was set up in front of police headquarters in Lawrenceville and flags there were at half-staff.

Gwinnett County is in the metropolitan Atlanta area and has 920,000 residents. Toney’s killing is the first line-of-duty death in the county since May 1993, when an officer was killed in a traffic incident.

Three officers were shot to death in April 1964.

Toney’s death was the second fatal shooting of a law enforcement officer this week. North Carolina State Trooper Kevin K. Conner was killed Wednesday during a traffic stop near the border with South Carolina. A suspect was taken into custody.

MADISON COUNTY, Ala. — A Confederate memorial monument on the county courthouse property in downtown Huntsville was taken down early Friday morning. Work began around midnight and the soldier was down by 2:00am.

In an interview Monday, County Commissioner Roger Jones said it was his understanding that the monument would be removed from the courthouse this week and moved to the area of Maple Hill Cemetery where Confederate soldiers are buried. A concrete slab has recently been poured there.

ATHENS, Ala. -- A homeowner in Athens is outraged after she said Limestone County road crews doing maintenance work, coated part of her front yard with discarded concrete, and left without cleaning it up.

"It was too big and too thick for a rake so I had to take a bucket and just kind of scoop it up in the bucket with my hand and then haul it off and then come back and start over. I worked from about 1:30 P.M. to 5:30 P.M. cleaning up about a 25-foot span," said the homeowner, Kay Moran.

HUNTSVILLE, Ala. - The pandemic has caused people to worry about more than just their health. COVID-19 caused tremendous job loss in Alabama creating financial troubles for some families.

Thursday, the Alabama Department of Labor acknowledged there was false information about claim funding circulating.