LIMESTONE COUNTY, Ala. – Several limestone county parents say the school bus crash that happened in their neighborhood this week could have been avoided if drivers would just slow down. 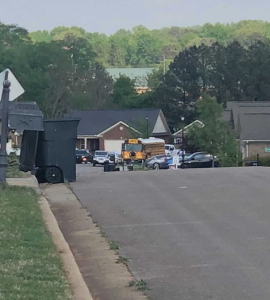 Some have spent years asking for speed bumps to be installed on their street.

“People coming east and west on Thunderpaw, they are using it as a shortcut to get from Old Railroad Bed to Sanderson and vice versa. They are running through the stop signs. They are not even doing a roll through which, I will almost be people happy if that’s what people did at this point,” Ateneh Graham explained.

Graham isn`t the only concerned mother in the community. “It`s dangerous. I have to watch my kids very, very closely. I don`t even let them check the mailbox,” Erica Ham said.

Erica Ham said people are not going the residential speed limit of 25 miles per hour.

Graham has taken her concerns to her commissioner Steve Turner and County Engineer Bryant Moss. She asked them to install speed bumps.

Moss said speed bumps are too much of a risk and a liability to the county. “It definitely hurts a little bit that we care more about small cars than small children,” Graham said.

The county`s engineer said they`ve added more traffic signs to alert drivers to slow down. “These reflectors are not really doing anything. The stop signs aren`t stopping anything. I have been told this is a law enforcement issue,” Graham explained.

Graham said she`s seen an increase in deputy presence encouraging drivers to slow down, but adds that they can`t be there all the time

The county engineer said speed bumps also make it difficult for emergency responders to drive through the neighborhood.

MADISON, Ala. - Some Madison residents are concerned about the safety hazards and gaping holes in their yards from a major construction project.

The City of Madison along with Madison Utilities are currently working on major projects along Highland Drive.

MADISON, Ala. - We all have people and things that are near and dear to our hearts. For some people, it's a stuffed animal.

Nicole Adams, owner of the Stuffed Animal Clinic of Madison, made it a mission to restore, preserve, and return those beloved stuffed animals or blankets back to their humans as soon as possible. Often, she returns them the same day so people don't have to spend a night without them.

Operating from home, Adams saw an opportunity to put her sewing skills to use. She knows how special stuffed animals or blankets can be to not only children but people of all ages.

Adams said she gets some visitors that are in pretty rough shape. Some are very dirty, and most all of them are well-loved. She gives each stuffed animal individualized care, replacing eyes, buttons, and any other missing accessories.

"A lot of them are very dirty and very well-loved and they have holes and their fur is sometimes matted, so I'm just kind of giving a service that I know a lot of other parents might not be able to do either with scheduling or not knowing how to sew," said Adams.

To eliminate unnecessary contact, Adams offers drop off delivery at her front door. Orders can be made through her Facebook page.

From 10 a.m.-11:30 a.m., the virtual event will give job seekers an opportunity to learn more about and talk with hiring managers from Mazda Toyota Manufacturing (MTM), Toyota Motor Manufacturing Alabama, YKTA, and Bocar.