Skip to content
This is an archived article and the information in the article may be outdated. Please look at the time stamp on the story to see when it was last updated.
HUNTSVILLE, Ala. – A wreck on Saturday on Wall Triana Highway and McCrary Road left one 92-year-old woman dead. Madison Police said they were on the scene of a wreck, but one of the cars involved in the wreck was a Madison Police Officer’s vehicle. Because of that, Huntsville Police Department had to step in to complete the investigation. Huntsville Police Department’s spokesman Lt. Michael Johnson says so far nothing abnormal has turned up from the investigation. “There was in fact a Madison Police Officer in his marked car,” said Johnson. “He was traveling southbound on Wall Triana and the citizen that collided with him was traveling northbound.” Details are limited but the wreck blocked traffic going both ways on Wall Triana Highway. Madison Police posted on Twitter saying a Madison City police officer was involved in the initial wreck in their cruiser. The officer and driver of the second vehicle were transported to Huntsville Hospital with non-life threatening injuries. A passenger in the civilian vehicle died Sunday afternoon, according to Lt. Johnson. HPD identifies the passenger as 92-year-old Phyllis Pine. Emergency crews transported Pine and the police officer from the scene to the hospital. Witnesses of the wreck tell WHNT News 19 that the officer was trying to pass someone in the opposite lane on Wall Triana Highway. Lt. Johnson says you’re allowed to pass people on that road, but until they see the video they can’t be sure that the wreck was the Madison officer’s fault. “There’s definitely video that’s going to come into play in determining the exact cause of the accident,” said Johnson. “We do know, most likely, the officer is at fault but there’s a lot of unanswered questions that we have to get answered.” After reviewing evidence on Tuesday, Lt. Johnson says the evidence is still pointing in one direction. “Our traffic homicide investigators, who are supposed to specialize in investigating traffic accidents have received that file and they’re investigating it,” said Johnson. “They will be looking at the new video in the coming days and see what direction we’re going to go with that. But all preliminary evidence at this time does show us that the officer most likely is at fault.” The City of Madison told WHNT News 19 in a release that the officer is currently at Huntsville Hospital recovering from surgery related to the injuries sustained in the accident. The driver of the other car’s conditions are unknown at this time, but Johnson tells WHNT News 19 that the Huntsville Police Department is reviewing the video from the officer’s car soon and will give us updates after.

After the recent officer-involved accident on Wall Triana and McCrary Road, The City of Madison expresses condolences to the family of Ms. Phyllis Pine. “We are deeply saddened by the loss of Ms. Pine and send our regards to her grieving family. Our public servants can assure citizens that road safety remains a primary focus in the Madison community,” said Mayor Paul Finley. The accident investigation is currently being lead by the Huntsville Police Department. Madison Police Chief, David Jernigan comments, “HPD has full support from our agency throughout this matter, and we will continue to cooperate on every level for a thorough investigation.” HEMSI’s Wreck After Leaving the Scene Directly after the wreck involving the Madison Police Officer and the other car, each person involved in the collision was being transferred by HEMSI to Huntsville Hospital. 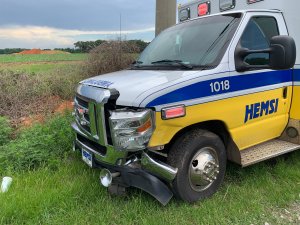 Shortly after leaving the scene, one of the HEMSI ambulances was involved in another wreck. HEMSI’s community communications officer, Don Webster says the collision was small. “One of the patients [that had] none life-threatening injuries, [HEMSI] was transporting that patient to Huntsville Hospital Trauma Services when they were involved in a wreck, it was really a minor wreck,” said Webster. He says one of the paramedics inside the ambulance had minor injuries, but there was no delay in taking care of the patient.

MADISON COUNTY, Ala. - Everyone in Madison County will be required to wear a face covering or mask starting Tuesday, July 7 at 5:00 p.m., according to the Alabama Department of Public Health. The state issued the health order Monday afternoon on request of the Madison County Board of Health.

"We need to do all we can to limit the spread of COVID-19," State Health Officer Dr. Scott Harris said in the release. "Until we have a vaccine or treatment for COVID-19, wearing a face covering in p

MADISON, Ala. - A Limestone County Correctional Facility employee was placed on mandatory leave Monday pending an investigation into a dispute that occurred at a Chick-fil-A drive-thru.

Madison Police say, Friday night, the Alabama Department of Corrections employee brandished a firearm during the altercation at the restaurant on Highway 72.

MADISON, Ala. - Friday night, the Rocket City Trash Pandas started off the Fourth of July weekend with another block party.