MADISON, Ala. – Duluth Trading Company has plans to build a store right off I-565 in the Town Madison development, according to Madison planning documents.

The clothing company has a site plan for a 15,566-square-foot building on 2.33 acres on Graphics Drive, just off I-565. Madison officials would not confirm the store’s interest in the site but confirmed the existence of the planning document.

When contacted by WHNT News 19, a Duluth Trading Company spokesperson said the company does not discuss new stores until “the leasing, permitting and development process has been thoroughly vetted.” 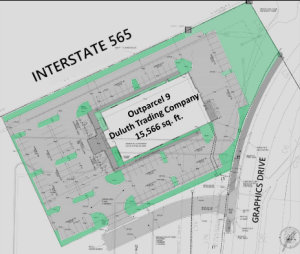 Duluth Trading Company was founded in 1989 in Belleville, Wis., and specializes in work wear and gear for men and women who “lead a hands-on lifestyle and who value a job well-done.”

Duluth has more than 40 locations, primarily in the Midwest. A location in Madison would be the first in the southeastern United States. Another store is preparing to open in Greensboro, N.C.

Madison’s planning commission is scheduled to vote on the plan Thursday.

Duluth Trading Company would be the first retail announcement for Town Madison. Apartments and a Margaritaville hotel have already been announced for the development, as well as a stadium for the new Minor League Baseball team, the Rocket City Trash Pandas.

MADISON, Ala. -- Breland Companies confirms with News 19 that I Love Sushi will be the first restaurant to open in the Town Madison area.

The pandemic caused many businesses and restaurant to put a pause on expansion, but buildings continue to be under construction in the 563-acre modern, urban community.

MADISON, Ala. -- Town Madison, a 563-acre modern, urban community broke ground in 2014 and is still an active project. The ramp intended to connect the area to I-565 has yet to be open, though many believe it's finished.

Trash Pandas President and CEO Ralph Nelson says it should have been open months ago to prevent traffic congestion.

MADISON, Ala. - Local churches, Madison City Schools, and one food-centered nonprofit have partnered with the Rocket City Trash Pandas for Madison's first mass grocery giveaway of the year.

President Biden ‘checks in on Alabama’ after deadly tornado