MOULTON, Ala. (WHNT) – Lawrence County Sheriff Gene Mitchell says he has complied with a judge’s order and formally notified the Decatur Daily newspaper that he does not have documents related to a fatal deputy-involved shooting they sued him for access to.

The newspaper’s lawsuit sought access to Incident/Offense Reports, transcripts of 911 calls, dash cam or body camera video and any disciplinary records stemming from the March 19th shooting death of 39-year old Shane Watkins, described by the newspaper as a mentally ill man. Mitchell says all of the materials were turned over to agents with the Alabama State Bureau of Investigation as soon as they took charge of the investigation.
A March 19th news release from Mitchell’s office says deputies responded to a domestic disturbance call at Watkins’ home in the Lang Town Community. It says Watkins charged at the deputies with a weapon, later described as a box cutter type of knife, ignoring warnings to drop the weapon. One of the deputies shot Watkins, killing him.
In the days that followed, Watkins’ family told reporters they had been trying for days to get mental health care assistance for him, saying he was scheduled to be examined later in the day that he died.
Mitchell has thus far refused to publically identify the deputy who shot Watkins citing threats against the officer’s safety. He also declined to release details of evidence gathered at the scene of the shooting explaining their entire file had been turned over to state investigators.  It is customary for law enforcement agencies to ask outside agencies to handle investigations of their own personnel to help guarantee impartial results.
Lauderdale County Circuit Court Judge Gil Self, who heard testimony in the newspaper’s lawsuit Friday, ordered Mitchell to produce certain records before noon Saturday if they were in fact in his possession. 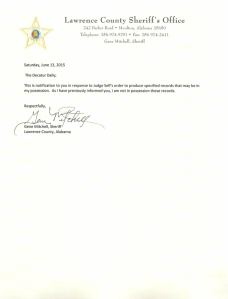 In a letter to the newspaper dated Saturday, June 13, 2015, Mitchell writes, “This is notification to you in response to Judge Self’s order to produce specified records that may be in my possession. As I have previously informed you, I am not in possession (of) these records.”
A Lawrence County Grand Jury is scheduled to take up the shooting of Watkins later this month.
34.481206-87.293353

HUNTSVILLE, Ala. - The Huntsville Housing Authority failed to tell tenants about high levels of radioactive gas found in 60 public housing units at one of its properties. The authority has known about it since last fall.

WHNT's news partners at The Huntsville Times and AL.com revealed this revelation in a recent investigative story.

ONEONTA, Ala.- A show of patriotism took place in Blount County on Monday as more than 100 community members and veterans’ groups came together for a bridge dedication.

The rain did not stop people from paying tribute to veterans in Blount County.

MONTGOMERY, Ala. (WIAT) — Alabamians heading to the polls next Tuesday may notice one ballot item that could change the way members on the Alabama State Board of Education are selected.

Amendment One would change the Alabama Constitution to make the board one appointed by the governor as opposed to an elected position.